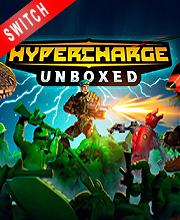 What is HYPERCHARGE Unboxed Game Code?

It's a digital key that allows you to download HYPERCHARGE Unboxed directly to Nintendo Switch directly from Nintendo eShop.

How can I find the best prices for HYPERCHARGE Unboxed on Nintendo Switch ?

Allkeyshop.com compares the cheapest prices of HYPERCHARGE Unboxed on the digital downloads market to find the best sales and discount codes on trusted stores.

HYPERCHARGED: Unboxed is a cooperative third-person and first-person shooter video game with defense building mechanics set in suburban home environments. It is played from a first-person perspective. Most of the gameplay is built around constructing defenses, combat, exploration, and character customization. Walk down the toy memory lane and prepare to be filled with nostalgia for your once forgotten toys. You must complete the mission of Sgt. Max Ammo and prevent the HYPER-CORE from being destroyed

Hypercharge: Unboxed is a fun and unique addition to the small library of shooters already on the Nintendo Switch. Digital Cybercherries’ debut title on the platform offers fun and addictive wave-based shooter gameplay for all ages. With the game’s cute art style and smooth performance, it is hard to go wrong with picking up a content-filled game like this.

Even though there are plenty of online multiplayer games out there, Hypercharge Unboxed is a solid enough offering to be worth playing. The fact that you play as toys is something that the whole family can enjoy, too.

Hypercharge Unboxed is by no means whatsoever a bad game. Actually, it is one I look forward to revisiting as time goes on. It is extremely promising, but it isn’t quite there yet. If you have a group of friends you can reliably play with and you’re willing to trudge through the rough spots, there is certainly plenty of content to enjoy here. It also happens to somehow be one of the most visually impressive games I’ve played on Switch.

NINTENDO CODE : This is a digital code for HYPERCHARGE Unboxed Nintendo Switch. Use the download code on the Nintendo eShop of your Console. Once connected to the Nintendo eShop, you can enter and redeem the Download Code. Read carefully the store description about any language and region restrictions.
Standard Edition