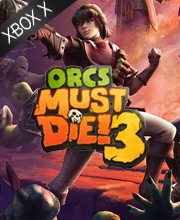 What is Orcs Must Die 3 Game Code?

It's a digital key that allows you to download Orcs Must Die 3 directly to Xbox Series X from Xbox Live.

How can I find the best prices for Orcs Must Die 3 on Xbox Series X ?

Allkeyshop.com compares the cheapest prices of Orcs Must Die 3 on the digital downloads market to find the best sales and discount codes on trusted stores.

Prepare your defenses, the horde is returning bigger than ever in Orcs Must Die 3; the 3rd main series game of the orcs must die franchise made by Robot Entertainment. 20 years had passed since the re-establishment of the order lead by our former heroes Battlemage and Sorceress. The Order is a dedicated group of war mages who have made it their duty to protect the realm by guarding the rift against the other side making sure no orc passes into the human realm. Now it’s time for the newer generation to take the mantle, you play Kelsey and Egan on their journey to become heroes of their own right.

There is lots to love about Orcs Must Die 3, from the cartoon colored levels to the depth of coming up with working strategies and tactics to cull the oncoming swarm. The combat is fast and frantic, and the weapon variety is plentiful and most of all fun. If I had to level a complaint at this game, it would be the announcer. The audio is passable for everything else but the lines that the announcer uses gets repetitive quite quickly. But even with that slight annoyance, the game as a whole is a triumph of sandbox fun.

Orcs Must Die! 3 feels like a known quantity from the moment it loads up. Those who have never played before will have a great time discovering the various traps and monsters the developers at Robot Entertainment have come up with over the years, but experienced players don’t have much to get excited about. The additions are nice for what they are, but they don’t give a true upgrade to what the series is known for beyond the graphical bump that comes with making a game on new hardware like Xbox Series X. There’s no denying that this is the best that Orcs Must Die! has looked, and the War levels do throw more enemies than ever at players. Going in with the lowered expectations of a remaster rather than a full sequel makes all the difference, but it’s hard to say whether or not a game that still feels a decade-old is worth the return trip.

Orcs Must Die 3 provides 3 the base game and 2 DLCs.

This Orcs Must Die 3 Bundle includes the following:

Orcs Must Die 3 – Cold as Eyes

This Orcs Must Die 3 Cold as Eyes includes the following:

Orcs Must Die 3 – Tipping the Scales

This Orcs Must Die 3 Tipping the Scales includes the following: