15 of the Best Story Rich Games and Compare Prices

” You want to play a Story Rich Games, but don’t know which one to choose?

Luckily Allkeyshop is here to help you with this top 15 of the best Story Rich Games! “

Go back to 1899 and relive the end of the wild west era in this epic open-world adventure from Rockstar Games. Set in a realistic world, the game features a hair growth mechanic that sees Arthur’s hair and facial hair grow over the passage of time. Red Dead Redemption 2 is a fully realized world with 1,200 actors used to bring it to life. Of those actors, 700 of them share 500,000 lines of voiced dialogue with the game boasting more than 300,000 individual animations. Over time train tracks and buildings will be constructed as you progress through the 60 hour story, adding further realism to the game’s living world.

Carve your way through an award-winning adventure in the latest souls-like action game from legendary developers FromSoftware. The game focuses on combat, exploration, and stealth, with particular emphasis put on boss battles. Though it takes place in fictional areas, some inspiration comes from real-world locations in Japan.

Persona 4 Golden sets players on a course to unravel the mysteries surrounding a series of murders. Experience an authentic Japanese mystery full of myths and legends. Utilize fire, ice, wind, electricity, light, dark, and almighty abilities to solve mysteries of the small town of Inaba.

Punch, kick, throw, and combo your way to glorious victory in the goriest Mortal Kombat ever. Refine your online or offline skills with modes such as Story Mode, Towers of Time, Klassic Towers, and Krypt. Play with all 37 characters, including The Joker and The Terminator, and humiliate your opponent with more than 100 finishing moves as each character has two Fatalities and a Brutality.

A mafia saga comes to life in this highly detailed, stunning, and epic single-player mob story. The Definitive Edition features an expanded story, improved gameplay, and of course, a lot more crime. Rise through the ranks and live the life of a mobster.

8. Shadow of the Tomb Raider

Play as the legendary Lara Croft as she races to save the world from a Maya apocalypse. The game features the largest hub in the franchise, the Hidden City of Paititi, in the continent of Central America. Hunt wild animals, craft materials, barter for goods, solve puzzles and rappel down cliffs using Lara’s climbing ax and rope.

Enjoy endless spectacular fights with more than 20 all-powerful fighters from the incredible DRAGON BALL series. Get to grips with aerial combos, destructible stages, and 3v3 tag-team action in 60fps and 1080p resolution. Fight in ranked matches, crazy 6-player party matches, and an exclusive story mode with a brand new character.

Immerse yourself an epic adventure set in the Holy Roman Empire and make choices that truly matter in a story-driven RPG. Quests are non-linear with every NPC having their own daily routine that can be interrupted by the player. NPCs react to all player actions and crime can affect economics with NPCs becoming aggressive or suspicious after unresolved crimes. The game is set in 1403 in the Kingdom of Bohemia and features a classless role-playing system, giving the player complete freedom of how they customize their skills. Director Daniel Vávra and Producer Martin Klíma are both co-founders of company Warhorse Studios, developers of Kingdom Come: Deliverance.

Jump into the first isometric party-based RPG set in the Pathfinder universe and explore the Stolen Lands. The game features 23 classes, more than 50 weapons, and more than 300 spells. As Pathfinder: Kingmaker is a party-based game, there are 12 companions to get to know as you unravel the story with multiple endings available based on your choices.

Devil May Cry 5 brings back the devil hunting and high-octane slaying that fans have been waiting for, all in the glorious over-the-top action the series is known for. Devil May Cry 5 sees the return of Dante and Nero as playable characters, along with new character, V. Capcom went for photo-realistic graphics and targeted 60 frames per second on every platform it released on. They even created actual clothes in London and scanned them in Serbia using the RE Engine to make clothes in the game look more realistic. The game features 7 ranks for its style ranking system that grades you after every fight and level. It starts at D, for Dismal and moves up to SSS, for Smokin’ Sexy Style.

What is a Story Rich Game?

A story-rich game focuses on narrative, and drives the action forward by telling an immersive story in a believable setting. 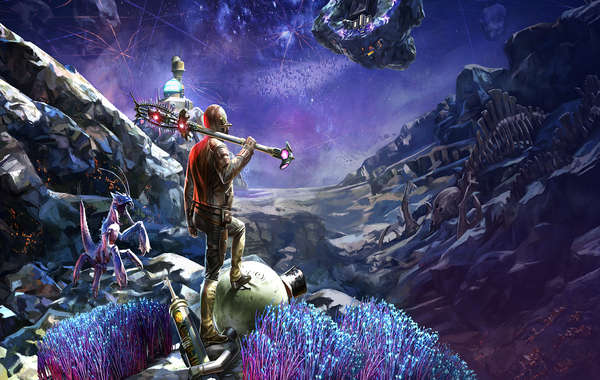 Story rich games rely heavily on characters, dialogue, and storytelling to keep the player interested and wanting to play through to the end.

These games have the player control a single character or party that develops or levels up through experience gained from combat, exploration, and interactions.

The main focus points for a good story in a video game are interactivity and narrative. Both must work for a quality gaming experience.

Why Are We Doing a Top 15 Story Rich List

Story Rich are available at incredible prices, but with so many to choose from, we want to help you pick the game that’s right for you.