15 of the Best Story-Rich Games and Compare Prices

“You want to play a Story-Rich Games, but don’t know which one to choose?

Luckily Allkeyshop is here to help you with this top 15 of the best Story-Rich Games!”


Alyx takes place between the events of Half-Life and Half-Life 2. Refine your aim and use the cover of a broken wall to make the impossible shot and rummage through shelves for healing items or ammo for your weapons. Learn to use tools to hack alien interfaces, and use your hands to fight off enemies or throw an item for a distraction.


Play as a detective with a unique skill system and a whole city to carve your path across in a multi-award winning RPG from developers, ZA/UM. There are four primary abilities: Intellect, Psyche, Physique, and Motorics, each of these has six secondary skills, resulting in a combined 24 skills. The game has a secondary inventory system, the Thought Cabinet. Thoughts can grant the player character permanent benefits or adverse effects.

Relive the end of the Wild West era in this epic open-world adventure. Live the life of an outlaw with federal agents and bounty hunters tracking your every move. Rob, steal and fight for survival across America’s heartland, and become a bounty hunter, trader, collector, or moonshiner in the single-player 60-hour story, or jump online into Red Dead Online.

Play as V, a mercenary obsessed with seeking out a one-of-a-kind implant that is the key to immortality in the open-world of Night City. Cyberpunk 2077 features a first-person perspective with V’s face, hairstyle, clothing, background, body type, and modifications, all customizable. Play minigames, including hacking, boxing, auto racing, martial arts, and shooting ranges.

Stay ahead of the Empire in Respawn’s third-person action-adventure that sees you travel the galaxy as an abandoned Padawan to rebuild the Jedi Order. Explore the galaxy and uncover ancient forests, windswept rock faces, and haunted jungles. Use your lightsaber in immersive combat, striking, parrying, and dodging with the Force’s aid.


Persona 4 Golden sets players on a course to unravel the mysteries surrounding a series of murders. Experience an authentic Japanese mystery full of myths and legends. Utilize fire, ice, wind, electricity, light, dark, and almighty abilities to solve mysteries of the small town of Inaba.


Return to the Forgotten Realms and play an all-new and original story set in the Dungeons & Dragons universe. Combat is based on D&D 5e rules, with team-based initiative roll modifiers and advantage and disadvantage. Tackle the challenge together with online 4-player multiplayer and choose to either complete quests together or separately.


Drop into a mature game and explore a vibrant world full of strange characters. Reveal the past and find out how your choices change the fate of you and those around you.

Slash and dash through this fast-paced neo-noir action-platformer and use the power of time to your advantage. Dodge and trap your enemies in increasingly-creative ways. Discover a rich story written by the blood of those you defeat.

Take on the role of Kazuma Kiryu again in the remastered Yakuza Kiwami 2, and battle for control of the streets in the Yakuza clan wars. Fight against new clans, new bosses, and discover updated versions of favorite minigames and new ones. Uncover the secrets and beauty of Japan in this wonderful remaster with 4K support and unlocked framerates.

Sakuna, a harvest goddess, is banished from her home and forced to find her place amongst a world overrun by demons. Use farming tools as weapons of destruction and chain together attacks to defeat powerful enemies. Learn to plant and harvest crops to help Sakuna grow in strength, and gather ingredients as you travel to craft weapons and armor.

What is a Story-rich Game? 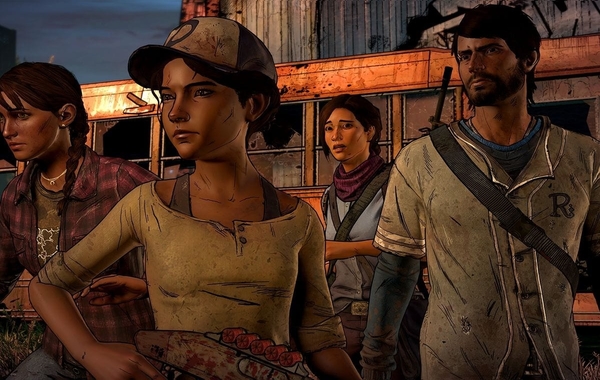 Story-rich games emphasize choice, with players deciding the fate of the events, characters, and the environment.

Players will control a single character or party that develops or levels up through experience gained from combat, exploration, and interactions.

Story-rich games feature quests or missions that the player must complete to advance the main storyline.

Why Are We Doing a Top 15 Story-rich Games List?

Story-rich Games are available at incredible prices, but with so many to choose from, we want to help you pick the game that’s right for you.