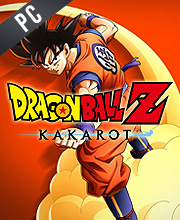 It's a digital key that allows you to download Dragon Ball Z Kakarot directly to PC from the official Platforms.

How can I find the best prices for Dragon Ball Z Kakarot CD keys?

Allkeyshop.com compares the cheapest prices of Dragon Ball Z Kakarot on the digital downloads market to find the best sales and discount codes on trusted stores.

Dragon Ball Z: Kakarot is an action, role-playing video game that is developed by CyberConnect2 Co. Ltd. and published by Bandai Namco Entertainment.

From the Dragon Ball universe comes another game where players get to relive the story of Goku as well as the other Z fighters. There will be epic battles, eating, training and a whole lot more.

Experience all aspects of Dragon Ball Z from the bigger than life events to the simple, light-hearted side quests. You will be given a treat of some never-before-seen moments that will give you answers to some questions to the Dragon Ball lore.

Battles are of epic proportions with hugely destructible environments. Look forward to fighting with Freiza, Cell Raditz and others in the boss battles.

The game also comes with different RPG mechanics which you can use to increase your power level.

Aside from all the fighting, enjoy the adventures and form powerful bonds with the other friends that you will meet along the way in this new game.

Dragon Ball Z Kakarot is an open world action RPG. The story follows an adult Goku and his son Gohan. In the brilliantly realized world of Dragon Ball Z, you will run at insane speeds, swim or fly, and every time you run into opponents, the game enters battle mode. Fights in open 3D space go great with Dragon Ball Z style, so you will fight in the air, shoot with energy projectiles, block, avoid, counter and very easily perform special moves after the classic DBZ charging. There are also comrades who will join you from time to time and whose support moves you can also control. The world of Dragon Ball Z is totally insane. Running only towards missions and fights that will move the story is usually not a good idea, because some of the first boss fights can be a big problem if Goku is not leveled enough or equipped with healing items. In this way, the game forces you to explore the world more and deal with side quests, even in the style of an RPG game - grinding. However, things rarely get boring and tiring, especially if you are a fan of the Dragon Ball Z universe, you will constantly find easter egos around the world and new hobbies. The beautiful style of graphics allows this title to simply fly on weaker PC machines as well as regular versions of consoles of this generation. Very nice cell shaded graphics authentically transfer moments from the anime series to the game, and great voice acting completes the impression, although as always we recommend the original Japanese voices that can be included in the options. Original songs, melodies from the series and their variations also make the atmosphere complete.

I grew up with dragon ball franchise, its a big part of my life, and I can just say that this game really capture the essence of the dragon ball universe, even still I played the story of dragon ball z in the previous games I just never get bored of it.. mostly because this game its well made in terms of fighting system and the graphics very pleasant, if you were born in the 90s and want to feel nostalgic just play this game and you will not regret it, basically it will take you back in time where you were so excited for ''THE NEXT EPISODE OF DRAGON BALL Z'' I highly recommend it !

Kakarot is quite a fun game at times, but it is hampered by side content that was obviously added for the sake of quantity, not quality.