15 of the Best MMORPG Games and Compare Prices

“You want to play a MMORPG Games, but don’t know which one to choose?

Luckily Allkeyshop is here to help you with this top 15 of the best MMORPG Games!”

Tamriel comes to life in an ever-expanding and persistent world full of adventure, mystery, and choices. Choose your playstyle, decide where to start and end your adventure, and quest alone or with friends. Wage war, craft items, and battle it out against hundreds of other players in intense PvP.


Enter the biggest MMO on the planet, with dozens of races, unique classes, epic skills, and intense PvP available. Complete quests, mine for resources, craft items, trade on the player-driven auction house, go fishing or explore the lore. Shadowlands is the game’s eighth expansion and features Covenant sects, rewards, and perks, and offers a smoother leveling experience, with the cap now set to 60.


Create your legacy and make choices that matter within an interactive story set in the Star Wars universe. Choose from eight selectable classes, each with its unique storylines. Subscribers get an increased level cap, access to recent expansions, and monthly Cartel Coins to spend on the Cartel Store for exclusive items.

Explore the real-world planets, moons, and asteroid belts of our own Milky Way in this open-ended space simulator. See your actions have consequences as governments rise and fall, and wars are won and lost. Upgrade and customize every component of your ship as you hunt, explore, fight, mine, smuggle, and trade.

Make the character you want to play with a robust character creation tool and jump into skill-based combat and siege wars. Fish, trade, craft, cook, and hunt monsters and huge bosses in a world that offers seamless movement with no loading times. Experience day/night cycles, unique weather, mounted combat, and the taming and breeding of horses and elephants.

Join an ever-evolving world and form a posse and ride across frontier America. Explore mountains, swamps, farms, and outposts. Learn to hunt, fish, trade, or run your own business in a world that offers incredible depth.


Explore a living world that comes to life with thousands of stories and events designed for solo or co-operative play. Attack on the move, learning to dodge and roll to avoid incoming attacks. Play your way with dozens of professions, weapons, and unique playstyles available.

Control four interchangeable characters and earn valuable rewards by completing quests and defeating bosses to increase the World Level. Switch characters quickly during combat, each offering unique skills and abilities to deal damage and alter the environment. Play with others in 4-player cross-platform co-op action and unlock extra characters.

Embark on an incredible massively multiplayer creature-collection adventure and attempt to end the evil Clan Belsoto’s rule over the Airborne Archipelago. Catch, train, and fight your Temtem in the wild, the arenas, or against other tamers in an ever-expanding world. Customize your character, your house, name your Temtem and join forces with friends to bring down the eight Dojo leaders.

Create your own character and jump into an original story set in the Gun Gale Online universe. Make choices that will change the world around you, explore ruins and war-torn lands, meet old and new faces from the Sword Art Online franchise, and return hope to those that have forgotten its meaning.

Save the Last City of humanity against the dark forces in a responsive first-person shooter, and experience the epic cinematic story alone or with friends. Choose your Guardian class, featuring Titan, Warlock, and Hunter. Collect a fantastic array of exotic weapons and armor and play with or against your friends and other Guardians in PvE and PvP game modes.

Jump into an epic and ever-changing MMO adventure. Experience unique disciplines to become a Disciple of War, Disciple of Magic, Disciple of the Hand, or a Disciple of the Land. A unique armory system means that your equipped weapon or crafting tool determines your character class, allowing you to switch roles at will.


Enter a highly-immersive ever-expanding sandbox and choose your path in a community-driven MMO. Learn skills, fly hundreds of ships, mine in space or on planets, complete storyline quests, and buy and sell on the community-driven marketplace. Join a corporation, work together towards a goal, or join an alliance and fight for glory in massive online battles against other players.

Explore a city based on the Dungeons & Dragons Forgotten Realms campaign and discover iconic locations and classes from the tabletop game. Learn when to attack, dodge, and attack to maximize effectiveness. Play completely free, and play any class from level 1 to level cap.

What is an MMOPRG Game? 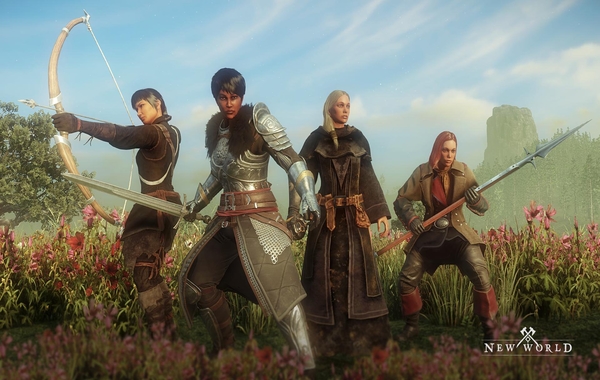 Players commonly level up their character by completing quests and defeating enemies, with experience earned and put back into the character through points.

MMORPGs stand out from MMOs due to their social gameplay, as players need to work together if they want to build and develop in-game.

MMORPGs feature both PvE and PvP, and often the in-game economy is influenced and dictated by players.

Why Are We Doing a Top 15 MMORPG Games List?

MMORPG Games are available at incredible prices, but with so many to choose from, we want to help you pick the game that’s right for you.