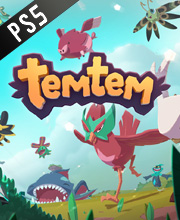 What is Temtem Game Code?

It's a digital key that allows you to download Temtem directly to Playstation 5 from PSN (PlayStation Network).

How can I find the best prices for Temtem on Playstation 5 ?

Temtem is a shallow imitation of Pokémon, though the little things it does to mix up the formula go a long way at making it feel fresh. In its current form, it’s no Pokémon rival, but being in Early Access means it has plenty of room to grow.

Temtem aims to set itself aside from Pokemon as a solid monster collecting game in its own right. For the most part, it succeeds.

PLAYSTATION CODE : This a Playstation Game Code to download Temtem PS5. Activate the code on the Playstation Network. Read carefully the store description about any language and region restrictions.
Deluxe Edition
Standard Edition