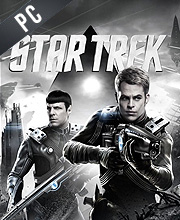 What is Star Trek CD key?

It's a digital key that allows you to download Star Trek directly to PC from the official Platforms.

How can I find the best prices for Star Trek CD keys?

Allkeyshop.com compares the cheapest prices of Star Trek on the digital downloads market to find the best sales and discount codes on trusted stores.

Star Trek is an action–adventure video game developed by Digital Extremes and co-published by Bandai Namco Games and Paramount Pictures in association with CBS Studios International.

Set in the 23rd Century world of the massively popular Star Trek reboot, the story takes place in the Star Trek universe, between the events of the films Star Trek and Star Trek Into Darkness.

The game uses a third-person perspective where players have the opportunity to play as two of the greatest science-fiction heroes ever – Kirk and Spock – (two characters showing different gameplay techniques) as they embark on an epic journey filled with action-packed combat fighting their way accross a number of environment on a mission to investigate the theft of a terraforming device from the colony of New Vulcan by the Gorn.

With good graphics, ineteresting storyline, fantastic gameplay and an awesome experience in either co-op or single player mode, it’s a worthy addition to your library.

PUBLISHER WEBSITE CD KEY: Use the CD Key Code to download directly on the Official Website or from the store to play Star Trek. Follow the instructions given by the store. Verify languages available and possible region restrictions before buying.
STEAM GIFT : A Steam gift is a one-time transfer you receive. You activate and install Star Trek to play on Steam, it is a non-refundable game that stays in your Steam games collection. Please read the store description about any language or region restrictions.
STEAM CD KEY : Use the Steam Key Code on Steam Platform to download and play Star Trek. You must login to your Steam Account or create one for free. Download the (Steam Client HERE). Then once you login, click Add a Game (located in the bottom Left corner) -> Activate a Product on Steam. There type in your CD Key and the game will be activated and added to your Steam account game library.
STEAM KEY ROW : It means for Rest Of the World countries which are not concerned by the region restrictions. This product can't be purchased and activated in Several countries. Please read the store description to know the full list of countries which are concerned. Use the key to Download and play Star Trek on Steam.
Standard Edition
Compare Choose & Buy Download (689)