15 of the Best Gore Games and Compare Prices

“You want to play a Gore Games, but don’t know which one to choose?

Luckily Allkeyshop is here to help you with this top 15 of the best Gore Games!”

Explore an abandoned hotel resort in post-communist Poland in the 90s and use your unique psychic abilities to solve a dark mystery. Play in two worlds simultaneously, the real and the spirit worlds, with the game’s patented mechanic. Solve dual-reality puzzles, discover new paths, unlock past events, and experience true horror brought to life by our evil deeds and darkest urges.


Survive together in this top-down survival horror spanning more than 250km. Select from eight unique characters, and wield your weapon of choice, from shotgun to flamethrower, as you tackle a dozen unique monster types. Play solo or in online co-op with up to 4-player support.


Inspired by the FPS games of the 90s, Prodeus has heavy weapons, massive enemies, community-made maps, a level editor, high score support, and lots of blood. The action is fast-paced, the combat brutal and unforgiving, and the explosions over the top. Blast your way through levels, collecting keys, discovering secrets, and dismembering your enemies as you attempt to slay your creator, Prodeus.

Enter fast-paced medieval battles and experience castle sieges, cavalry charges, and brutal multiplayer melee action. Fight with more than 70 weapons including hammers, spears, swords, two-handed swords, maces, quarterstaffs, and bows in all-out war game modes such as Frontline and Battle Royale. Character creation gives you full control with you able to sculpt your face, create your weapons from parts, and pick out individual pieces of armor to create the warrior that you want.


Enter the stunning world of a built-for-VR medieval fantasy and become the powerful warrior your enemies will fear. Blade and Sorcery features a unique physics-driven melee system with collisions dictated by fine hitboxes, and objects having a weight that follow the rules of physics. Currently, in Early Access, the game boasts five maps, more than ten weapons, three spells, avatar customization, jumping, kicking, running, climbing, and advanced modding. Upon release, the game is expected to have a player inventory, a skill tree, new enemy types, new content, and full modding.

Punch, kick, throw, and combo your way to glorious victory in the goriest Mortal Kombat ever. Refine your skills in online or offline matches with modes such as Story Mode, Towers of Time, Klassic Towers, and Krypt. Play with more than 30 characters, including Sub-Zero, Scorpion, Raiden, Shang Tsung, The Joker, and The Terminator, and humiliate your opponent with more than 100 finishing moves as each character has two Fatalities and a Brutality.

Survive in an open-world fantasy where zombies roam the earth, and a small community of survivors is attempting to rebuild in the apocalypse. The decisions are yours to make, as you recruit new members, fortify and upgrade your base, and select the party for scavenging for food and ammo. Survive the apocalypse alone or in online co-op, with the ability to join your friends and help them through their toughest times.


Survive in a procedurally generated co-op survival horror on a submarine traveling in an ocean on Jupiter’s moon Europa in a game inspired by FTL and Rimworld. As the last of humanity explore the ocean, operate weapons, engines, and sonar, complete missions, and decide whether to fight or flee the terrifying monsters you encounter. Craft items to help your crew survive, or betray them all and bring the submarine down in brutal 2-16 player online multiplayer.


Fight the undead, scavenge through the flooded ruins of New Orleans and face gut-wrenching decisions – all in virtual reality. Survive your way. Face the undead with guns blazing, or sneak and hide amongst them. Earn valuable resources doing missions and risk your life to protect or murder anyone who stands in your way. In VR, The Walking Dead comes to life and gives you freedom of choice. Use melee, ranged, and makeshift weapons. Knock undead heads clear off, creep through streets and scavenge and scale sides of building, cars, and walls to ambush enemies. It’s your life, live The Walking Dead.

Set nineteen years after BJ Blazkowicz disappeared in German-occupied Paris, you take on the role of his twin daughters as they now attempt to bring down the Nazi regime. Play alone or with a friend to complete missions. Unlock abilities, weapons, and cosmetics as you battle through Paris. The weapons are bigger, the Nazis are more challenging, and the gameplay is smooth and fast.

What is a Gore Game? 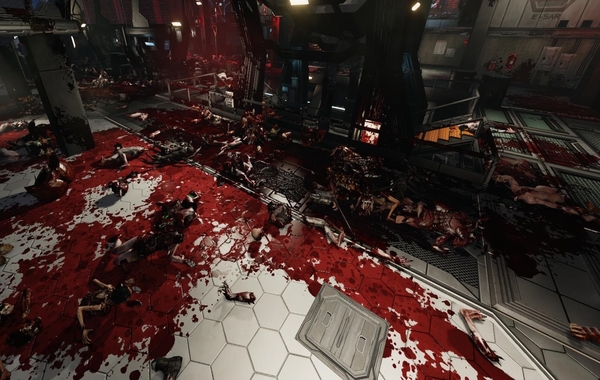 Gory games are mature-rated and are violent throughout, including the showing of dismemberments and decapitations. Gore can be shown realistically through injuries, broken limbs, and wounds.

Gore sees particular use in the fighting and FPS genres.

Why Are We Doing a Top 15 Gore Games List?

Gore Games are available at incredible prices, but with so many to choose from, we want to help you pick the game that’s right for you.