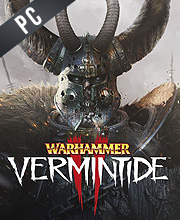 What is Warhammer Vermintide 2 CD key?

It's a digital key that allows you to download Warhammer Vermintide 2 directly to PC from the official Platforms.

How can I find the best prices for Warhammer Vermintide 2 CD keys?

Allkeyshop.com compares the cheapest prices of Warhammer Vermintide 2 on the digital downloads market to find the best sales and discount codes on trusted stores.

Take on the endless horde Monsters in Warhammer Vermentide 2 a co-op hack and slash game the sequel to the critically acclaimed Warhammer Vermentide, the five heroes return to take on a much bigger threat than before the combined power of the Skaven horde and the forces of Ruinous chaos, do not falter in the face of overwhelming odds because if you do the empire will surely fall.

FatShark has done a fantastic job of taking their first game and improving on every single aspect. The recurring theme of offering players a variety of tools, characters, and enemies to face leads to a crescendo of unique moments that are all entirely player-driven. While the difficulty spikes can be frustrating, part of the fun in Vermintide 2 is being against the odds and prevailing.

It’s undoubtedly a game that will be tweaked and expanded upon over its lifetime, but Warhammer: Vermintide 2 already feels like a formidable co-op package. Beautiful audio and visuals back up its engaging gameplay, performance is solid, and its serving of content is generous. Throw in some deep character options and development and you have a winner. If you’re into co-op gaming then Vermintide 2 is essential.

The base game and the Death of the Reik DLC

A bundle of all fat shark studios games.

The base game plus all major DLC’s available.

The base game and the Death of the Reik DLC.

The Blight Reaper a powerful Chaos rune sword that has been passed down to hundreds of warlords over generations has found itself in the town of Bögenhafen the curse of the sword has seeped through the land and attracts an army of rot blood’s if the town is to be saved the sword must be captured and destroyed.

Warhammer: Vermintide 2 Back to Ubersreik

Return to Ubersreik rumored birthplace of Sigmar, at the behest of Olesya the resident spymaster and grey wizard to uncover a dark secret hidden within the city.

Winds of magic introduce a new enemy faction to the game the Beastmen a race of savage mutant humanoids that are said to have the intelligence of men and the cunning ferocity of wild animals, these beasts willingly embrace chaos and wish to plunge the world into bloody carnage.

Find all the best prices for Warhammer Vermintide 2 DLC’s on Allkeyshop!

Absolute gem of a game. So underrated, I would recommend it to anyone. Cheap too. I have a total of 474 hours in this game and with all the DLC I still play it all the time.

Allkeyshop is the best for compare prices. Every game what you want in this site. Don’t forget to check it!!

Allkeyshop is the best for compare prices. Every game what you want in this site. Don’t forget to check it!!

Is the key region free?? i mean i can buy it form game.com US and activate it in steam with EU ip?

To be sure that the game will work on your country, we suggest that you contact the seller through their customer support for them to be able to provide you with an accurate answer.

Amazing coop game. They clearly pumped everything they could from Left 4 dead but who cares? Good coop games like this are scarce. Excellent price point aswell