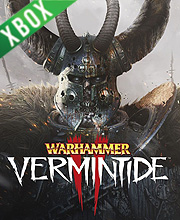 What is Warhammer Vermintide 2 Game Code?

It's a digital key that allows you to download Warhammer Vermintide 2 directly to Xbox One from Xbox Live.

How can I find the best prices for Warhammer Vermintide 2 on Xbox one?

Allkeyshop.com compares the cheapest prices of Warhammer Vermintide 2 on the digital downloads market to find the best sales and discount codes on trusted stores.

Take on the endless horde Monsters in Warhammer Vermentide 2 a co-op hack and slash game the sequel to the critically acclaimed Warhammer Vermentide, the five heroes return to take on a much bigger threat than before the combined power of the Skaven horde and the forces of Ruinous chaos, do not falter in the face of overwhelming odds because if you do the empire will surely fall.

With various difficulties to tackle and work through, secrets items to find that affect loot quality while offering additional challenge, in addition to the large and mostly accommodating community – Warhammer: Vermintide II is a must for fans of co-op. Or, anyone still holding out for Left 4 Dead 3.

Vermintide 2 is simply outstanding. The graphics and gameplay are top-notch. Teamwork is vital and actually one of the best parts of the game. You will constantly have something to work towards, and the fun doesn’t seem to cease as you play. There is little left to desire and few negatives. The occasional glitches and bad join-in progress can be overlooked, as they happen on fairly rare occasions.

Base game plus the Winds of magic DLC

A collection of both Vermintide Games

The base game plus a collection of cosmetics.

The base game, 2 Major DLC’s, and a collection of cosmetics.

The Blight Reaper a powerful Chaos rune sword that has been passed down to hundreds of warlords over generations has found itself in the town of Bögenhafen the curse of the sword has seeped through the land and attracts an army of rot blood’s if the town is to be saved the sword must be captured and destroyed.

Warhammer: Vermintide 2 Back to Ubersreik

Return to Ubersreik rumored birthplace of Sigmar, at the behest of Olesya the resident spymaster and grey wizard to uncover a dark secret hidden within the city.

Winds of magic introduce a new enemy faction to the game the Beastmen a race of savage mutant humanoids that are said to have the intelligence of men and the cunning ferocity of wild animals, these beasts willingly embrace chaos and wish to plunge the world into bloody carnage.

Find all the best prices for Warhammer Vermintide 2 DLC’s on Allkeyshop!

Fully worth it! Really good game to play with friends.