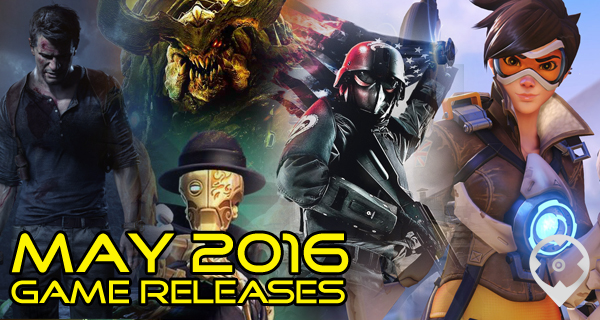 It’s that time of the year again where a new month begins and new games are going to be released! And to keep up with the trends, we bring you the most-awaited games of May 2016 for PC, Playstation 4, and Xbox One!

From major titles like Overwatch, Battleborn, and DOOM, the best upcoming games of May 2016 are right here at Allkeyshop.com!

Battleborn, the next-gen shooter game from the creators of Borderlands, is an action-packed game that will truly satisfy your gaming experiience. With 25 playable heroes on its roster, enjoy playing in Story Mode or in 5 vs. 5 Team-Based Competitive Multiplayer Mode with your friends! The game is equipped with an accelerated character growth system (Helix System) which allows you to level up your chosen character and experience its full potential once it reaches level 10.

Kathy Rain is an indie adventure game set in the 90’s that tells the story of a badass strong-willed college girl who has detective abilities. After being away from her hometown since her childhood, she returns and starts investigating a case which also involves the legacy of her grandfather who recently passed away. Follow each clue and solve the mystery that lies in front of you! Kathy Rain features a 4:3 resolution with crisp pixelated graphics that will remind you of 90’s arcade games.

Paradox Development Studio brings you Stellaris, a simulation strategy game that brings simulation and space exploration together in one game. Build your empire in the galaxy, colonize other planets and alien life, expand your territory, and see yourself dominating the universe! The game will surely keep you playing for hours as it is packed with galaxies containing thousands of planets and various races! You’ll also get to enjoy its Ship Designer plus its stunning outer space visuals!

Be the boss in TransOcean 2: Rivals! Build your shipping line empire from the bottom and reach the top! Be a smart businessman and keep watch of your rivals as they also pose as a threat to your growing business. The game features 3 different game modes (Campaign Mode, Endless Game, and Competition Mode) that will test your strategy-making skills. It also has a Multiplayer Mode which allows you to compete with other players. All these and so much more are waiting for you, so don’t hesitate and get your hands on TransOcean 2: Rivals!

Just when Nathan Drake thinks his fortune hunting is over and done with, his brother, Sam, calls for his help and gives him an irresistible offer. Uncharted 4 A Thief’s End brings us to another of Nathan Drake’s adventures as he goes on hunting for the hidden treasure of Captain Henry Avery. Exclusive for the Playstation 4, this game will surely bring you around the world in a journey filled with action, challenges and treasure hunting goodness.

An online multiplayer game, BattleSouls promises players a gaming experience that is filled with nothing but action, action, and more action! Your goal in the game is to destroy your opponents’ soul crystals before they go ahead and destroy yours using one of three heroes which you can switch at any time during the game. The game features 5 different classes each with unique abilities and gameplay. Also enjoy fast 10-15 minute multiplayer matches set in 4 colorful and different maps.

DOOM 4 returns in a more badass first-player shooter form, bringing a more challenging, brutal, and fun gaming experience. The game brings with it “relentless demons”, highly-destructive guns, and fluid movement along with intense combat. Enjoy all these in either Single-Player or in Multiplayer Mode. PLUS! Enjoy limitless gaming with its level and game editor, SnapMap, which allows even newbies to customize the game in any platform.

America has fallen in the hands of the Korean People’s Army (KPA), who rose as a dominant country after the Korean War. In Homefront The Revolution, you are the leader of the Resistance, and you bear the weight of liberating the city of Philadelphia one zone at a time. Build the Resistance and recruit revolutionaries to help you in your cause. Explore its open world and wage warfare against the oppressors whether in its compelling single-player story mode, or in online co-op mode.

Valkyria Chronicles Remastered is a tactical role-playing game from Sega for PlayStation 3 and is remastered for PlayStation 4. The game is set in the World War II era and the location is Europa. A neutral nation in Europa named Gallia is rich with Ragnite Ore making them a target of the East European Imperial Alliance. As players of the game you must defend your nation of Gallia from the impending attack. You will take command of the Gallian Militia to accomplish this. Valkyria Chronicles Remastered is a turn-based game. The system is called BLiTZ (Battle of Live tactical Zones). The game’s characters will have different roles. Although stats and weapons may be similar, the characters will have different special abilities that can be used in battle.

Overwatch is the latest first-player shooter game that features a 6 vs. 6 multiplayer team in a squad based combat gameplay. Battle it out with other players in three main game modes: Assault, Escort, and Control. Choose your character according to your chosen role: Offense, Defense, Tank, or Support. Set in the near-future, immerse yourself in an action-packed multiplayer shooter experience with Overwatch!

Total War: Warhammer is from the Total War series. Developed by Creative Assembly and published by SEGA. Set in the universe of Warhammer this real-time tactics video game with elements of turn-based strategy will offer you four playable factions namely: the Empire, the Greenskins, the Dwarfs and the Vampire Counts. Expect new quest modes that feature new missions for you to complete. You will also notice that the campaign map is quite similar to Attila but a major difference would be the climate and physical terrain.

Teenage Mutant Ninja Turtles: Mutants in Manhattan is an action, hack-and-slash video game. The badass turtles are back and this time they are in New York City. New York is in trouble as The Shredder and the Foot Clan aim to take over the city. The Shredder allied with General Krang, Armaggon, Karai, Wingnut, Bebop and Rocksteady and Slash to wreak havoc in the city. But they won’t be able to take over the city that easily as Donatello, Leonardo, Raphael and Michelangelo with Master Splinter and April O’Neil will be there to protect it.

Learn how to fly with Dovetail Games Flight School! Dovetail Games Flight School is a simulation video game that will send you straight to the cockpit. The game’s missions as well as its challenges will get you flying in no time like a pro. Choose from either the Piper PA-18 Super Cub or the Piper PA-28 Cherokee as your training aircraft. Finish all 9 missions and complete all 15 lessons to make you a veteran flyer. If you’ve mastered all your lessons, the Free Flight mode can bring you anywhere in the world to test your skills.

Dungeons 2 will now be available for PlayStation 4. The Dungeon Lord has been cursed in a half-life state. Even though that is the case you must restore your evil dominance over your land. Use your “Hand of Terror” in order to take control of your inexperienced army of worker Snots. Start out by building your dungeon which will in turn let you gain gold and experience. With more gold and experience stronger creatures will be available for you to control like the boulder throwing trolls, to the Goblin assassins and Orcs.

Sherlock Holmes: The Devil’s Daughter from the Adventures of Sherlock Holmes series will bring you to confront  a very dark family secret. The game is the 8th of the series and will bring you to investigate evil of a demonic nature. A unique and extraordinary experience will keep you on your toes as you search for answers within London. Follow clues and interview suspects and keep a keen observation on everything. Solve the mystery of the Devil’s Daughter and find out what revelation it holds.

Ignite the flames of battle in One Piece Burning Blood. The world famous stretchy pirate Luffy is here with a roster of famous characters from the anime One Piece. Expect a  colorful and dynamic fighting game in Burning Blood. Guard up in this fast paced fighting game with its destructive combos and ridiculous action. Get to fight 3 on 3 where you can switch from your chosen roster of three characters to create great catastrophic attacks.  Use the forbidden Devil Fruit to bring out devastating special moves and takedowns!