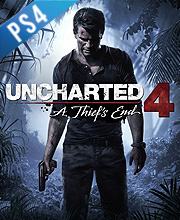 What is Uncharted 4 A Thiefs End Game Code?

It's a digital key that allows you to download Uncharted 4 A Thiefs End directly to Playstation 4 from PSN (Playstation network).

Allkeyshop.com compares the cheapest prices of Uncharted 4 A Thiefs End on the digital downloads market to find the best sales and discount codes on trusted stores.

Uncharted 4: A Thief’s End is an action/adventure video game developed by Naughty Dog and published by Sony.

The story begins three years after the events of Uncharted 3: Drake’s illusion, Nathan left the world of treasure hunt. However, fate decided otherwise in the person of Drake’s brother, Sam, whose life is in danger. He was five years older than his brother Nate, and everyone thought he was dead. Sam appears to be even more reckless,he seems a bit jealous of his brother’s success.

He ask him for help and Drake offers an adventure he can not refuse. In search of the lost treasure of Captain Henry Avery, Sam and Drake toil to find the pirate utopia Libertalia deep in the forests of Madagascar.

The game is to discover in solo or multiplayer where you can explore the many places with friends where exploration, strategy and teamwork are rewarded. You can also count on the help of one of the four ”accomplices” you can hire him to fight with you, cares for your friends, support you with his striking force or track your opponents.

You will also have the possibility to acquire “mystical” equipment or summon creatures directly inspired by the ancient game in the series, such as El Dorado cursed sarcophagus, the powerful Chintamani Stone Shambhala or impetuous Djinn of the lost city of Ubar.

Uncharted 4: A Thief’s End takes players on a journey around the globe, through the islands covered by jungle, large cities and across snowy peaks in search of Avery treasure for hours of fun.

All the effects show in this video demonstrates what it’ll be like, such as the Sand, water, and flies. Good graphics and good story!

Best game I wish I had it. I already have the other 3 Uncharted games. They’re the BEST!! 😀

Great graphics, game, sound, gameplay. I played this game and I love it so much!

Game looks great, makes me want to buy it but I don’t have the money right now 🙂

Game of the year!!!! Uncharted 4 is best visual game ever…and story is great too 🙂