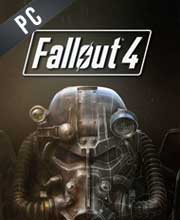 What is Fallout 4 CD key?

It's a digital key that allows you to download Fallout 4 directly to PC from the official Platforms.

How can I find the best prices for Fallout 4 CD keys?

Allkeyshop.com compares the cheapest prices of Fallout 4 on the digital downloads market to find the best sales and discount codes on trusted stores.

You are the sole survivor of Vault 111. Fight for survival in a world filled with dangers and struggles thanks to the nuclear apocalypse that took place over a hundred years ago.

Its combat is the best Bethesda have ever produced: involving, kinetic, and exciting.

It’s insanely ambitious and utterly absorbing, a game that has clearly had thousands of hours poured into every detail of its compelling world.

The Game of the Year Edition bundles the base game with all 6 released DLCs: Automatron, Wasteland Workshop, Far Harbor, Contraptions Workshop, Vault-Tec Workshop and Nuka-World.

A mysterious wastelander known as the Mechanist has let loose a horde of murderous robots. Destroy them and retrieve their parts to build your very own robot companions. Mod your creations with hundreds of limbs, armor, abilities and weapons. Customize them with different paint schemes and give them a voice for the perfect wasteland partner.

The Wasteland Workshop allows players to design traps and cages to capture live creatures. These creatures can be pitted against each other, tamed, or sent to attack other settlers. You also get several new design options for customizing your settlements.

Travel to the island of Far Harbor, an area with higher levels of radiation and home to more feral creatures. Investigate the escalating conflict between the synths called the Children of Atom and the local townspeople while you unlock more powerful weapons and higher-level armor.

Take your settlements to the next level with all sorts of new machines. Build conveyor belts, logic gates, elevators, greenhouses and other complex gadgets and mechanisms to improve your life and those of other settlers.

Create the Vault of your dreams thanks to the new Vault-Tec Workshop. Entice new Dwellers with nostalgia as you fit your Vault with pre-war furniture and decor. Follow the footsteps of other Overseers before you and conduct Vault-Tec approved experiments to determine what makes an ideal citizen.

Take a trip to Nuka-World, a once-bustling amusement park that has become a haven for Raiders. Explore this vast new region with different themed zones such as the Safari Adventure, the Galactic Zone and more. Become the leader of your own Raider gang while going through new quests and unlocking new gear.

The gameplay side is fun but the roleplaying is very watered down compared to others in the series.

Fallout 4 has a very interesting story and offers different ways to experience it.

Fallout 4 its an amazing apocalyptic open world type of game and at his curent price its a must buy !!

Great game , the graphics for me arent that good but the gameplay is awesome , i like this game a lot