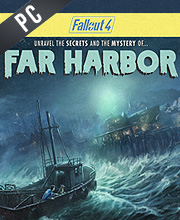 It's a digital key that allows you to download Fallout 4 Far Harbor directly to PC from the official Platforms.

How can I find the best prices for Fallout 4 Far Harbor CD keys?

Allkeyshop.com compares the cheapest prices of Fallout 4 Far Harbor on the digital downloads market to find the best sales and discount codes on trusted stores.

Fallout 4 Far Harbor is the third add-on for Fallout 4. The first add-on is Automatron and the second is Wasteland Workshop. This has been developed by Bethesda Game Studios and published by Bethesda Softworks.

Far Harbor is an island which is located off the coast of Maine. This mysterious island has been exposed to very high levels of radiation, which made it a feral world. You have been led here because the Valentine’s Detective Agency has a new case involving a missing young woman as well as the secret colony of synths.

Far Harbor may just be an island but this add-on has the largest landmass that the developers has created for a DLC. It will have new faction quests, new settlements as well as new dungeons. You will be kept on your toes with the new deadly creatures that abound. But will be well compensated with high end weapons and armor.

You will have to navigate between the growing conflict between the island’s inhabitants which are the synths, the local town’s people and the Children of Atom.

Will you be able to bring peace to this curious island?

EU STEAM CD KEY: Requires an EUROPEAN IP address or you must activate it with a VPN (Virtual Private Network) in order to play Fallout 4 Far Harbor. Might have languages restrictions or language packs. Read the description on the store game page to know if the EU IP is only needed for activation or for playing also (maybe on EU Servers). Most of the stores offer you their help, or show you how to do this with a tutorial to follow.
STEAM GIFT : A Steam gift is a one-time transfer you receive. You activate and install Fallout 4 Far Harbor to play on Steam, it is a non-refundable game that stays in your Steam games collection. Please read the store description about any language or region restrictions.
STEAM CD KEY : Use the Steam Key Code on Steam Platform to download and play Fallout 4 Far Harbor. You must login to your Steam Account or create one for free. Download the (Steam Client HERE). Then once you login, click Add a Game (located in the bottom Left corner) -> Activate a Product on Steam. There type in your CD Key and the game will be activated and added to your Steam account game library.
Windows 10 Global : This is an Worldwide Microsoft code to play on PC for Worldwide . You need to have installed Windows 10 Anniversary Edition update on your PC. Log into your Microsoft account to download and play. Read closely the description given by the store to activate your game.
DLC