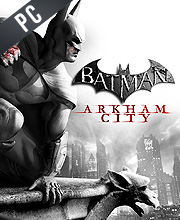 It's a digital key that allows you to download Batman Arkham City directly to PC from the official Platforms.

How can I find the best prices for Batman Arkham City CD keys?

Allkeyshop.com compares the cheapest prices of Batman Arkham City on the digital downloads market to find the best sales and discount codes on trusted stores.

Batman: Arkham City is an open-world action-adventure game that incorporates tactics from stealth games. It is presented from the third-person perspective, showing the playable character on screen and allowing the camera to be freely rotated around it. The game is set within Arkham City, which is open to the player from the beginning of the game, allowing them to travel freely anywhere within its boundaries.

The player can move silently throughout the game, using a combination of gadgets and stealth moves to sneak up on enemies and incapacitate them. Batman can use his cape to glide around the city, diving downward and swooping upwards to extend his flight, and he can use the grapnel gun’s retracting rope to attach to out-of-reach ledges.

As Batman, the player is able to use “Detective Vision“, a visual mode that highlights elements of interest on-screen, such as character status, collectibles, and clues; the mode is also used to perform forensic activities such as tracking the source of a sniper rifle round. The player has access to an in-game criminal database which includes forensic puzzles, as well as a network for hacking communication frequencies.

Zoom 1m 3m 1y All
Track product
EPIC GAMES KEY : Region Free / Worldwide. Requires Epic Games Launcher App in order to play the game. You need to create a free account here in order to download Batman Arkham City from Epic Plateform . Read the description on the store page about any language or country restrictions.
GOG.COM CD KEY : You need to register on Gog.com, then use the GOG Key to download and activate your game to play Batman Arkham City.
EU STEAM CD KEY: Requires an EUROPEAN IP address or you must activate it with a VPN (Virtual Private Network) in order to play Batman Arkham City. Might have languages restrictions or language packs. Read the description on the store game page to know if the EU IP is only needed for activation or for playing also (maybe on EU Servers). Most of the stores offer you their help, or show you how to do this with a tutorial to follow.
STEAM GIFT : A Steam gift is a one-time transfer you receive. You activate and install Batman Arkham City to play on Steam, it is a non-refundable game that stays in your Steam games collection. Please read the store description about any language or region restrictions.
STEAM CD KEY : Use the Steam Key Code on Steam Platform to download and play Batman Arkham City. You must login to your Steam Account or create one for free. Download the (Steam Client HERE). Then once you login, click Add a Game (located in the bottom Left corner) -> Activate a Product on Steam. There type in your CD Key and the game will be activated and added to your Steam account game library.
STEAM KEY ROW : It means for Rest Of the World countries which are not concerned by the region restrictions. This product can't be purchased and activated in Several countries. Please read the store description to know the full list of countries which are concerned. Use the key to Download and play Batman Arkham City on Steam.
Bonus Edition
Bundle
Collection
Game Of The Year Edition
Standard Edition
Compare Choose & Buy Download (772)

One of my favorite Batman games I wanted it for a long time , thanks to allkeyshop I was able to purchase at a very low price 😀

I love the Arkham series, and Arkham City is one of my favorite games

SPOILER ALERT! Probably the best Batman game in the arkham serie. Buy it also cause it doesn’t cost too much

Like the first game, this one shares the same type of gameplay and mechanics, but this time with an open world. New small features but the same essence.
Fully recommended as the first part, with lots of secondary content and alternative characters.