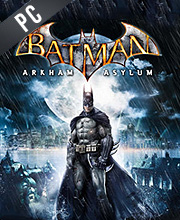 It's a digital key that allows you to download Batman Arkham Asylum directly to PC from the official Platforms.

How can I find the best prices for Batman Arkham Asylum CD keys?

Allkeyshop.com compares the cheapest prices of Batman Arkham Asylum on the digital downloads market to find the best sales and discount codes on trusted stores.

Batman: Arkham Asylum is a single player action–adventure game where the game character is visible on screen and the cameras around him can be rotated to view his surroundings.

The video game is based on DC Comic’s BATMAN. It was developed by British Studio Rocksteady Studios and published by Eidos Interactive and Warner Bros Interactive Entertainment.

The game is based on the comic book Arkham Asylum as opposed to most of Batman games. The Arkham Asylum is where the story of the game takes place. It is located on an island off the coast of Gotham City that houses criminally insane villains.

The story starts out when the game character, Batman, catches The Joker (Batman’s enemy) after causing havoc in Gotham City. The Joker was taken to Arkham Asylum where they temporarily house many of his men and was brought there and escorted by Batman. The real plot is, The Joker allowed himself to be captured and brought to the island together with Batman.

His true plan is revealed when one of The Joker’s companion took control of the security personnel and station and escapes from the facility, aided by the corrupt guards. The Joker threatens to detonate the hidden bombs around the city of Gotham if anyone tries to enter Arkham which pushes Batman to work alone and defeat the enemies.

Play as Batman and do everything in your power to stop Joker’s plans.

Zoom 1m 3m 1y All
Track product
GOG.COM CD KEY : You need to register on Gog.com, then use the GOG Key to download and activate your game to play Batman Arkham Asylum.
ORIGIN CD KEY : Use the Origin Key Code (Electronic Arts - EA) on Origin Platform to download and play Batman Arkham Asylum. You have to login to your Origin Account or create one for free. Download and install the Origin Software HERE) then you can activate the game on it. Once installed, start Origin, click on the Origin Tab and click on Redeem Product Code and just enter the key. The game will appear in your My games list.
EU STEAM CD KEY: Requires an EUROPEAN IP address or you must activate it with a VPN (Virtual Private Network) in order to play Batman Arkham Asylum. Might have languages restrictions or language packs. Read the description on the store game page to know if the EU IP is only needed for activation or for playing also (maybe on EU Servers). Most of the stores offer you their help, or show you how to do this with a tutorial to follow.
STEAM GIFT : A Steam gift is a one-time transfer you receive. You activate and install Batman Arkham Asylum to play on Steam, it is a non-refundable game that stays in your Steam games collection. Please read the store description about any language or region restrictions.
STEAM CD KEY : Use the Steam Key Code on Steam Platform to download and play Batman Arkham Asylum. You must login to your Steam Account or create one for free. Download the (Steam Client HERE). Then once you login, click Add a Game (located in the bottom Left corner) -> Activate a Product on Steam. There type in your CD Key and the game will be activated and added to your Steam account game library.
STEAM KEY ROW : It means for Rest Of the World countries which are not concerned by the region restrictions. This product can't be purchased and activated in Several countries. Please read the store description to know the full list of countries which are concerned. Use the key to Download and play Batman Arkham Asylum on Steam.
Bonus Edition
Bundle
Collection
Game Of The Year Edition
Standard Edition
Compare Choose & Buy Download (743)

This game is the first of the Arkham trilogy. Simply amazing for 1 euro is a must have for Batman lovers.

The first part of a great saga. Fully recommended today. Totally in tune with the movies and the world of Batman.
It cannot be missing from your library.

The best Batman game from the Arkham series IMO. Very good. I strongly recommend.
Would be a good addition to the SKB low tiers. 🙂

This game (and the rest of the series) captures the themes and look of Batman like no others.