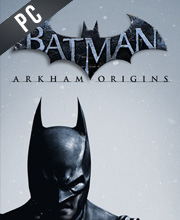 It's a digital key that allows you to download Batman Arkham Origins directly to PC from the official Platforms.

How can I find the best prices for Batman Arkham Origins CD keys?

Allkeyshop.com compares the cheapest prices of Batman Arkham Origins on the digital downloads market to find the best sales and discount codes on trusted stores.

Arkham Origin’s main story takes place five years before that of Batman: Arkham Asylum and introduces a younger unrefined Batman. This game incorporates fresh features just like this awesome new ability for Batman to virtually recreate crimes, giving him the opportunity to inspect the scene and identify who did such felony. It’s also the first in the series with multiplayer capability. There are a whole lot more of new skills that would definitely help Batman during combat and exploration, so it’s up to you on how you discover them along the way!

Batman: Arkham Origins uses a third-person perspective and focuses on Batman’s stealth game tactics, detective skills, and gadgets for combat and ventures as he confronts the most notorious criminals of Gotham City and establishes his worth to becoming the Dark Knight.

Batman: Arkham Origins is a beautiful, immersive, and addictive installment in the legendary ‘Arkham’ series. It boasts strong narrative, an expansive and atmospheric open world, and all the classic gameplay elements from the earlier titles. It is just about everything one might traditionally expect from a sequel and more! Get your dose of Batman action in this amazing game!

GOG.COM CD KEY : You need to register on Gog.com, then use the GOG Key to download and activate your game to play Batman Arkham Origins.
ORIGIN CD KEY : Use the Origin Key Code (Electronic Arts - EA) on Origin Platform to download and play Batman Arkham Origins. You have to login to your Origin Account or create one for free. Download and install the Origin Software HERE) then you can activate the game on it. Once installed, start Origin, click on the Origin Tab and click on Redeem Product Code and just enter the key. The game will appear in your My games list.
EU STEAM CD KEY: Requires an EUROPEAN IP address or you must activate it with a VPN (Virtual Private Network) in order to play Batman Arkham Origins. Might have languages restrictions or language packs. Read the description on the store game page to know if the EU IP is only needed for activation or for playing also (maybe on EU Servers). Most of the stores offer you their help, or show you how to do this with a tutorial to follow.
STEAM GIFT : A Steam gift is a one-time transfer you receive. You activate and install Batman Arkham Origins to play on Steam, it is a non-refundable game that stays in your Steam games collection. Please read the store description about any language or region restrictions.
STEAM CD KEY : Use the Steam Key Code on Steam Platform to download and play Batman Arkham Origins. You must login to your Steam Account or create one for free. Download the (Steam Client HERE). Then once you login, click Add a Game (located in the bottom Left corner) -> Activate a Product on Steam. There type in your CD Key and the game will be activated and added to your Steam account game library.
STEAM KEY ROW : It means for Rest Of the World countries which are not concerned by the region restrictions. This product can't be purchased and activated in Several countries. Please read the store description to know the full list of countries which are concerned. Use the key to Download and play Batman Arkham Origins on Steam.
Bonus Edition
Bundle
Complete Edition
Complete Pack
Premium Edition
Standard Edition
Compare Choose & Buy Download (723)

The arkham series are the best games i ever played. And Origins is no exception.

The game has been completely overcome by the next title but is so cheap that worth a try if you are a Batman fan.

Probably the worst game in the series, but it is still totally recommended. It is very cheap and for the price it deserves to be played.

Despite the criticisms for Batman Arkham Origins I really enjoyed this game. If you’re a fan of the Arkham games, it’s certainly worth the time.
It can also be a good addition to the SKB low tier wheels. 🙂