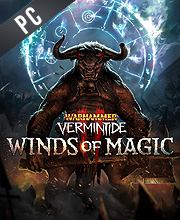 What is Warhammer Vermintide 2 Winds of Magic CD key?

It's a digital key that allows you to download Warhammer Vermintide 2 Winds of Magic directly to PC from the official Platforms.

How can I find the best prices for Warhammer Vermintide 2 Winds of Magic CD keys?

Allkeyshop.com compares the cheapest prices of Warhammer Vermintide 2 Winds of Magic on the digital downloads market to find the best sales and discount codes on trusted stores.

This is the very first expansion for the game Warhammer: Vermintide 2. This comes with a new enemy faction called the Beastmen. A new higher difficulty has also been added, plus a raised level cap, 5 new weapons, a new adventure level, and lastly a new game mode called the Winds of Magic where players get to experience the difficulties set about by the eight Winds of Magic.

The Reikland gets hit by a meteor which awakened the Beastmen. They came from the depths of Reikland’s forest and are after the meteor that has fallen in order to use it as a Herdstone. If that happens, disaster will surely spread across the Empire.

It is up to you and up to five other heroes to put a stop to the dread that is about to come.

This expansion made combat harder yes but also a lot deeper. You can’t just dodge an attack before it starts anymore and dance dodge while you strike and have your strike control all enemies in front of you. You have to actually pay attention to the enemies’ moves in front of you and decide whether you should attack, block, dodge, or push.