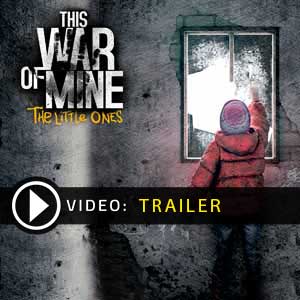 What is This War of Mine The Little Ones CD key?

It's a digital key that allows you to download This War of Mine The Little Ones directly to PC from the official Platforms.

How can I find the best prices for This War of Mine The Little Ones CD keys?

Allkeyshop.com compares the cheapest prices of This War of Mine The Little Ones on the digital downloads market to find the best sales and discount codes on trusted stores.

This War of Mine: The Little Ones is an action–adventure and survival single player game, developed and published by 11 bit Studios.

It is an enhanced version of the acclaimed and award winning This War of Mine, a game that immerses the player in a realistic urban warfare during a siege. Indeed, in This War of Mine, you control a small group of civilians trying to survive, hiding during the day in a shelter that you must maintain and consolidate. You have also to conduct expeditions at night to find the necessary resources despite the threat of patrolling soldiers or looters groups.

It is an original game, far from the usual shooters in the first person that take you on idealized and virtual battlefields. In addition, 11 bit Studios fight his way against the ravages of war, because they’re selling a pack of downloadable contents, and some of the revenues are donated to an association helping children victims of war.

Besides, This War of Mine: The Little Ones continues this crusade against the war as the game adds children characters, but unlike adults, they can’t die. If the moral of the children is at the lowest, they run away from your shelter and as result you fail your mission. Another original part, it’s that all the characters in This War of Mine: The Little Ones have been modeled from the staff of 11 bit Studios and their families.

In the classic style of a side-scrolling game with an environment which has a ruined building in a sectional view and an abundant decoration details, you must support a group of children and their guardians. Meet their needs (build beds, heating, supplies of water and food, get hold of pharmaceutical drugs…) while protecting them from violence. It represents difficulty as expectations of children are important, you have to make them play games, entertain them…

This game wants to invite us to think on the reality of war and addresses this issue by refusing to present it as an entertainment, it is a true masterpiece! Indeed, we can speak of masterpiece through a serious story that refers to a reality experienced by millions of people around the world, thanks to his very elaborate dialogues, an artistic achievement, graphics as soundtrack of high quality with a dark atmosphere, without forgetting its psychological dimension that places the player face to himself and his own morality.

How far will you go to survive and protect the children in your care?