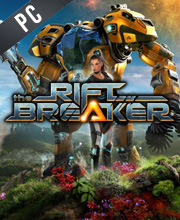 What is The Riftbreaker CD key?

It's a digital key that allows you to download The Riftbreaker directly to PC from the official Platforms.

How can I find the best prices for The Riftbreaker CD keys?

The Riftbreaker feels like a momentous big-budget release. Thankfully, its amazing visuals that scale well from less powerful rigs all the way to the latest GPUs keep its aesthetic an eye-popping selling point across multiple setups.

A fantastic game for any base-building fans, The Riftbreaker’s tight combination of action-RPG and tower-defense elements produce an addictively fun experience well worth the inevitable hours you’ll lose to it.

This DLC pack contains a complete collection of games, DLCs, and soundtracks developed and published by Exor studios.

The Deluxe Edition contains the base game and the following features

This expansion provides a new additional part of the campaign story that takes place in a recently explored biome.

Zoom 1m 3m 1y All
Track product
EPIC GAMES KEY : Region Free / Worldwide. Requires Epic Games Launcher App in order to play the game. You need to create a free account here in order to download The Riftbreaker from Epic Plateform . Read the description on the store page about any language or country restrictions.
GOG.COM CD KEY : You need to register on Gog.com, then use the GOG Key to download and activate your game to play The Riftbreaker.
EU STEAM CD KEY: Requires an EUROPEAN IP address or you must activate it with a VPN (Virtual Private Network) in order to play The Riftbreaker. Might have languages restrictions or language packs. Read the description on the store game page to know if the EU IP is only needed for activation or for playing also (maybe on EU Servers). Most of the stores offer you their help, or show you how to do this with a tutorial to follow.
EUROPEAN STEAM GIFT : It’s a steam gift for Europe which requires an European IP address to activate and to play The Riftbreaker on Steam. Read carefully the store description about region and language restrictions.
STEAM GIFT : A Steam gift is a one-time transfer you receive. You activate and install The Riftbreaker to play on Steam, it is a non-refundable game that stays in your Steam games collection. Please read the store description about any language or region restrictions.
STEAM CD KEY : Use the Steam Key Code on Steam Platform to download and play The Riftbreaker. You must login to your Steam Account or create one for free. Download the (Steam Client HERE). Then once you login, click Add a Game (located in the bottom Left corner) -> Activate a Product on Steam. There type in your CD Key and the game will be activated and added to your Steam account game library.
Windows 10 Global : This is an Worldwide Microsoft code to play on PC for Worldwide . You need to have installed Windows 10 Anniversary Edition update on your PC. Log into your Microsoft account to download and play. Read closely the description given by the store to activate your game.
Complete Pack
Deluxe Edition
Standard Edition
Compare Choose & Buy Download (772)