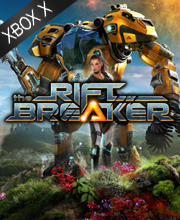 It's a digital key that allows you to download The Riftbreaker directly to Xbox Series X from Xbox Live.

How can I find the best prices for The Riftbreaker on Xbox Series X ?

The Riftbreaker is an addictive, complex, and satisfying RTS/bullet hell hybrid, even while it suffers from some very noticeable performance issues.

People that love Stardew Valley and wanted to see it collide with a kaleidoscope of other genres with a Sci-Fi coat of paint are in for a ride. For those that shudder at the sound of the words ‘Stardew Valley’ avoid.

The Deluxe Edition contains the base game and the following features