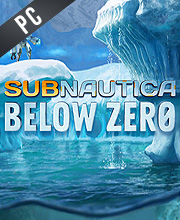 What is Subnautica Below Zero CD key?

It's a digital key that allows you to download Subnautica Below Zero directly to PC from the official Platforms.

How can I find the best prices for Subnautica Below Zero CD keys?

Allkeyshop.com compares the cheapest prices of Subnautica Below Zero on the digital downloads market to find the best sales and discount codes on trusted stores.

Subnautica: Below Zero is a survival adventure game published and developed by Unknown Worlds Entertainment.

Indulge in a sub-zero sub-surface aquatic adventure on an alien planet.

Below Zero occurs one year after the original Subnautica on the alien Planet titled 4546B.

Here lies the ultimate test of survival as players are forced to withstand the life threatening challenges that Below Zero has to offer.

In a desperate effort to avert certain death, you must craft tools with which you scavenge for dwindling resources.

Survive the hazardous aquatic environment to later unravel the next chapter in the Subnautica story.

Source answers to the many pressing questions surrounding this mysterious place such as: Who were the aliens who came here before?

Why were they on this planet? Can you trust your commanders?

The only path to the truth is through the depths of this unforgiving environment.

Gear up and dive in.

EPIC GAMES KEY EU : For EUROPE ONLY. Requires Epic Games Launcher App in order to play the game and an European IP adress. You need to create a free account here in order to download Subnautica Below Zero from Epic Plateform . Read the description on the store page about any language or country restrictions.
EUROPEAN STEAM GIFT : It’s a steam gift for Europe which requires an European IP address to activate and to play Subnautica Below Zero on Steam. Read carefully the store description about region and language restrictions.
STEAM CD KEY : Use the Steam Key Code on Steam Platform to download and play Subnautica Below Zero. You must login to your Steam Account or create one for free. Download the (Steam Client HERE). Then once you login, click Add a Game (located in the bottom Left corner) -> Activate a Product on Steam. There type in your CD Key and the game will be activated and added to your Steam account game library.
STEAM GIFT : A Steam gift is a one-time transfer you receive. You activate and install Subnautica Below Zero to play on Steam, it is a non-refundable game that stays in your Steam games collection. Please read the store description about any language or region restrictions.
Early Access CD Key. Play before the release date.
Standard Edition. Read the store description to know the content.
Bundle. Read the store description to know the content.

Be the first one to write a review about Subnautica Below Zero !