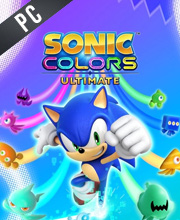 It's a digital key that allows you to download Sonic Colors Ultimate directly to PC from the official Platforms.

How can I find the best prices for Sonic Colors Ultimate CD keys?

Sonic Colors: Ultimate remasters the original 2010 release on the Wii, upping the graphics and offering more ways to enjoy the game. Despite some speed bumps, Sonic Colors: Ultimate is a worthwhile revisit to one of the series’ greatest adventures, and stands heads and Tails above many other 3D Sonic games.

This Edition of Sonic Colors Ultimate is only available if you bought the game before the release date it contains the base game plus free bonus content.