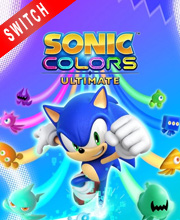 It's a digital key that allows you to download Sonic Colors Ultimate directly to Nintendo Switch directly from Nintendo eShop.

How can I find the best prices for Sonic Colors Ultimate on Nintendo Switch ?

Sonic Colors Ultimate is a well-executed revisit of a high point in Sonic’s long career. Most of the quality here stems from the content of the original, rather than the new additions and tweaks for this re-release.

Although not a perfect remaster, seeing Sonic Colors get ported to contemporary hardware was a welcome surprise. The Sonic series continues to struggle with finding a way to incorporate gameplay hooks that don’t amount to shallow, pointless gimmicks, but in Colors, SEGA discovered the perfect mix.

This Edition of the game contains the base game on a physical disk as a bonus it also comes with a physical toy, a baby sonic keychain accessory.

This DLC contains several Cosmetics for sonic based on the metal sonic design and the Sonic the Hedgehogs Movie counterparts moves.