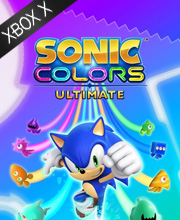 It's a digital key that allows you to download Sonic Colors Ultimate directly to Xbox Series X from Xbox Live.

How can I find the best prices for Sonic Colors Ultimate on Xbox Series X ?

This Edition of the game contains the base game on a physical disk as a bonus it also comes with a physical toy, a baby sonic keychain accessory.

This DLC contains several Cosmetics for sonic based on the metal sonic design and the Sonic the Hedgehogs Movie counterparts moves.