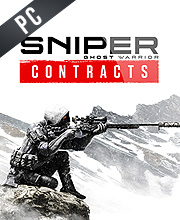 It's a digital key that allows you to download Sniper Ghost Warrior Contracts directly to PC from the official Platforms.

How can I find the best prices for Sniper Ghost Warrior Contracts CD keys?

Allkeyshop.com compares the cheapest prices of Sniper Ghost Warrior Contracts on the digital downloads market to find the best sales and discount codes on trusted stores.

Sniper Ghost Warrior Contracts is a stealth action FPS game developed by CI Games a sequel spin-off of the original Sniper Ghost Warrior franchise; Contracts focuses mainly on a loosely connected story, you work as a paid assassin, someone has hired you to kill government officials in the newly formed Siberian republic, former territories of the Russian federation established after a few Russian generals defected and made themselves defacto dictators of the area. The client has provided you with new equipment that you can for these missions a high-tech reconnaissance mask especially useful for marking targets, of course, you are free to use any method you want to employ as long as you get the job done and you make it out alive.

Sniper Ghost Warrior: Contracts find the fine line between action arcade and sniper simulation with only a few hiccups. While the story might be forgettable, landing the perfect shot from 500 meters away never stops being awesome.

Sniper Ghost Warrior: Contracts is one of those wonderful surprises that seem to pop out of nowhere. It easily surpassed my expectations and even has me looking forward to a continuation of the franchise. This is the game that should redefine the series from a niche sniper title into a mainstream stealth game with its quality movement systems, interesting toolset, and class-leading sniper mechanics.

Didn’t know there was a new Sniper Ghost Warrior game coming out, first time I’ve seen it right now..
Looks visually pleasing, though hopefully they fixed some of the issues the previous games had with the gameplay.

A new sniper elite! I love this saga, im going to buy it probably!

I am bit worried as last Sniper Ghost Warrior 3 was very bad, i think i will pass this game.

Not a fan of this game, but at least it’s quite cheap!