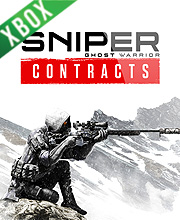 It's a digital key that allows you to download Sniper Ghost Warrior Contracts directly to Xbox One from Xbox Live.

How can I find the best prices for Sniper Ghost Warrior Contracts on Xbox one?

Allkeyshop.com compares the cheapest prices of Sniper Ghost Warrior Contracts on the digital downloads market to find the best sales and discount codes on trusted stores.

Sniper Ghost Warrior Contracts is a stealth action FPS game developed by CI Games a sequel spin-off of the original Sniper Ghost Warrior franchise; Contracts focuses mainly on a loosely connected story, you work as a paid assassin, someone has hired you to kill government officials in the newly formed Siberian republic, former territories of the Russian federation established after a few Russian generals defected and made themselves defacto dictators of the area. The client has provided you with new equipment that you can for these missions a high-tech reconnaissance mask especially useful for marking targets, of course, you are free to use any method you want to employ as long as you get the job done and you make it out alive.

Sniper Ghost Warrior Contracts offers a lot in a surprisingly small package, however, with all the glitches and errors, there is just some guilty pleasure I get when I drop a sniper from 500m+. With a lackluster story mode that means relatively nothing, some good but not great graphics, an army of glitches at its disposal, and no bullet X-Ray kill cam, this game is far from perfect, and at $40 maybe even a bit overpriced.

All in all though and I’ve enjoyed my time with Sniper Ghost Warrior Contracts on Xbox One. It is a little rough around the edges, and there are annoyances, but the core gameplay and the way the sniping is handled makes it a game that I can recommend if you are looking to scratch that sniping itch.