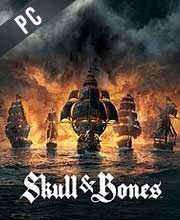 What is Skull & Bones CD key?

It's a digital key that allows you to download Skull & Bones directly to PC from the official Platforms.

How can I find the best prices for Skull & Bones CD keys?

Allkeyshop.com compares the cheapest prices of Skull & Bones on the digital downloads market to find the best sales and discount codes on trusted stores.

Skull & Bones is an action video game that is developed by Ubisoft Singapore and published by Ubisoft.

Get to sail the open seas with Skull & Bones! This Tactical action game that is set in an open world environment is playable in the third person perspective.

You will get to play as the captain of your customizable pirate ship. Play in the single-player campaign and set sail in the vast Indian Ocean or play with up to five players and engage in combat over Disputed Waters. In order to get the upper hand in battles, players must take into consideration the wind positioning.

Other ships can be collected throughout the game like sloops-of-war, frigates, and brigantines. There are also a variety of weapons to choose from your ship which are mortars, broadside cannons, and rockets.

A health bar will indicate the damages that your ship is taking during the battle. It is important to keep an eye on this when your ship is charged.

A multiplayer mode called LOOT Hunt is the core component of the game where groups are challenged to some treasure hunting.

I like the concept , but i want know more about it , no news since a while at this point

i need try this game, i see interesting to play. pirates, bones, ships, gold and rum!!! Yo ho ho ho!!

Hoping for the game to finally come out.. but will stay up to the hype!!

I feel this game never come to date. But i would play someday, looks funny.