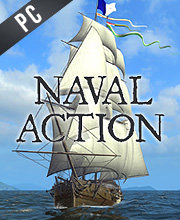 What is Naval Action CD key?

It's a digital key that allows you to download Naval Action directly to PC from the official Platforms.

How can I find the best prices for Naval Action CD keys?

Allkeyshop.com compares the cheapest prices of Naval Action on the digital downloads market to find the best sales and discount codes on trusted stores.

Naval Action is an open world sandbox that will let you experience commanding sailing ships. The ships are beautifully made right down to every last bit of detail. This is as realistic as it gets.

The game offers a huge map that is based in the 18th century map navigation. Make use of your compass and landmarks to find your way. Get to see the historical harbours, town names and positions.

The ships were made based on actual models of that era. Every aspect of the ship is well thought of, from the small cutter to the huge 1st rate ships. You will get to experience everything in that Age of Sail era.

As the ships are made realistically, sailing it will be the same way as well with an advanced wind and physics engine.

Not only will your ships be historically accurate, but your weaponry will be as well. This will be mainly made up of cannons that are ballistically accurate.

Choose your destiny in Naval Action, would be a pirate that wreaks havoc in the seas or the best ship conquering all the ports. Whichever way you would want to play it, be the top ruler of the seas.

Zoom 1m 3m 1y All
Track product
EU STEAM CD KEY: Requires an EUROPEAN IP address or you must activate it with a VPN (Virtual Private Network) in order to play Naval Action. Might have languages restrictions or language packs. Read the description on the store game page to know if the EU IP is only needed for activation or for playing also (maybe on EU Servers). Most of the stores offer you their help, or show you how to do this with a tutorial to follow.
EUROPEAN STEAM GIFT : It’s a steam gift for Europe which requires an European IP address to activate and to play Naval Action on Steam. Read carefully the store description about region and language restrictions.
STEAM CD KEY : Use the Steam Key Code on Steam Platform to download and play Naval Action. You must login to your Steam Account or create one for free. Download the (Steam Client HERE). Then once you login, click Add a Game (located in the bottom Left corner) -> Activate a Product on Steam. There type in your CD Key and the game will be activated and added to your Steam account game library.
Early Access
Standard Edition
Compare Choose & Buy Download (743)