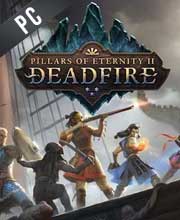 What is Pillars of Eternity 2 Deadfire CD key?

It's a digital key that allows you to download Pillars of Eternity 2 Deadfire directly to PC from the official Platforms.

How can I find the best prices for Pillars of Eternity 2 Deadfire CD keys?

Allkeyshop.com compares the cheapest prices of Pillars of Eternity 2 Deadfire on the digital downloads market to find the best sales and discount codes on trusted stores.

Pillars of Eternity 2 Deadfire is a party-based CRPG game developed by obsidian entertainment, a direct continuation to pillars of eternity 1. After the events of the first game, the watcher settles down on the fort of Caed Nua. But the unexpected happened the god Eothas goes rogue and possesses a giant Adra statue underneath the castle and devours the souls of all the people on the castle including the watcher himself, and goes on to walk towards the sea in the direction of the Deadfire archipelago. The remaining gods realizing that Eothas might be a danger to them and Eora revives the watcher in hopes that he might be able to stop him in whatever he might plan to do on there.

Pillars of Eternity II: Deadfire is an amazing game. Obsidian has gifted the already cluttered RPG genre with an excellent title that offers hundreds of hours’ worth of gameplay. Puzzles, ship combat, side quests, exploration, and other activities keep you occupied along the way. While it does most things right, those who aren’t used to combat mechanics like the ones used in this game may find it to be a little slow at times.

This edition contains the Pillars of Eternity 2 Deadfire base game plus additional in-game items and digital collectors memorabilia.

This edition contains the Pillars of Eternity 2 Deadfire base game plus the season pass, additional in-game items, and digital collectors memorabilia.

In the Southernmost islands of the Deadfire archipelago, a sheet of ice is slowly growing you receive a letter from the people living there the worshipers of Rymrgand the god of erosion, collapse, and entropy. They call you the Duskspeaker and wish for you to attend them as they pray to bring about the end of the world.

The Island of Kazuwari has housed the Temple of Toamowhai for centuries now, a gladiator arena where people compete for glory, riches, and favor from the faces of the hunt another aspect of Galawain the patron of the hunt, and protector of the wilds it is considered a holy place of the worshipers of Galawain but lately, the faces have become more bloodthirsty new participants facing off against odds they cannot possibly win Humaire the caretaker of the island decides to call on you the watcher to see what’s wrong with the faces of the hunt.

Eoras’ most powerful wizards called the circle of archmages has requests the aid of the watcher when one of their own Archmage Maura disregarded their council and pursued a forbidden weapon in the black isles hoping that it could be used to stop Eothas. But unbeknownst to her, she’s meddling with ancient secrets and powers far beyond her control.

Find all the best prices for Pillars of Eternity 2 Deadfire DLC on Allkeyshop!

Zoom 1m 3m 1y All
Track product
EU STEAM CD KEY: Requires an EUROPEAN IP address or you must activate it with a VPN (Virtual Private Network) in order to play Pillars of Eternity 2 Deadfire. Might have languages restrictions or language packs. Read the description on the store game page to know if the EU IP is only needed for activation or for playing also (maybe on EU Servers). Most of the stores offer you their help, or show you how to do this with a tutorial to follow.
EUROPEAN STEAM GIFT : It’s a steam gift for Europe which requires an European IP address to activate and to play Pillars of Eternity 2 Deadfire on Steam. Read carefully the store description about region and language restrictions.
STEAM CD KEY : Use the Steam Key Code on Steam Platform to download and play Pillars of Eternity 2 Deadfire. You must login to your Steam Account or create one for free. Download the (Steam Client HERE). Then once you login, click Add a Game (located in the bottom Left corner) -> Activate a Product on Steam. There type in your CD Key and the game will be activated and added to your Steam account game library.
Collection
Deluxe Edition
Obsidian Edition
Standard Edition
Compare Choose & Buy Download (791)

tried to buy it on eneba. They took my money and I didn’t get the key. stay away!

We are sorry to hear that, however, were you able to receive it already? Can you check again if it was sent? if not, we invite you to contact our live support for you to be able to give your feedback and review regarding your purchase.

Our agents will try to contact the store on your behalf if necessary.

Hrk store is the best store to buy a Pillars of Eternity 2 Deadfire Cd key!

Great prices, but i prefer cdkeys than kinguin!
have fun guys