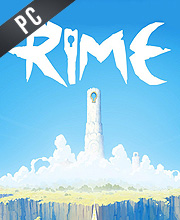 What is RiME CD key?

It's a digital key that allows you to download RiME directly to PC from the official Platforms.

How can I find the best prices for RiME CD keys?

Allkeyshop.com compares the cheapest prices of RiME on the digital downloads market to find the best sales and discount codes on trusted stores.

RiME is an adventure, puzzle video game that is played in a third-person view. The game is developed by Tequila Works, QLOC and published by Grey Box.

Discovery and puzzle-solving are what you can expect with RiME. This single-player puzzle adventure will bring you to an enigmatic island that is full of wild animals as well as ancient ruins. You will get to play as a young boy who for some reason finds himself on the island after a powerful storm. You won’t be alone though, as you will have company in a form of a friendly fox who can help you and guide you through the game.

Get to explore this beautifully mysterious island and collect all the hidden items available. Puzzles in the game are mind-bending as you will need to solve them using time manipulation, platforming, shadow and light projection, as well as sound.

Be enchanted with the beautiful world of RiME, uncover all the secrets and be captivated with the game’s story.

EPIC GAMES KEY : Region Free / Worldwide. Requires Epic Games Launcher App in order to play the game. You need to create a free account here in order to download RiME from Epic Plateform . Read the description on the store page about any language or country restrictions.
GOG.COM CD KEY : You need to register on Gog.com, then use the GOG Key to download and activate your game to play RiME.
ORIGIN CD KEY : Use the Origin Key Code (Electronic Arts - EA) on Origin Platform to download and play RiME. You have to login to your Origin Account or create one for free. Download and install the Origin Software HERE) then you can activate the game on it. Once installed, start Origin, click on the Origin Tab and click on Redeem Product Code and just enter the key. The game will appear in your My games list.
EU STEAM CD KEY: Requires an EUROPEAN IP address or you must activate it with a VPN (Virtual Private Network) in order to play RiME. Might have languages restrictions or language packs. Read the description on the store game page to know if the EU IP is only needed for activation or for playing also (maybe on EU Servers). Most of the stores offer you their help, or show you how to do this with a tutorial to follow.
STEAM CD KEY : Use the Steam Key Code on Steam Platform to download and play RiME. You must login to your Steam Account or create one for free. Download the (Steam Client HERE). Then once you login, click Add a Game (located in the bottom Left corner) -> Activate a Product on Steam. There type in your CD Key and the game will be activated and added to your Steam account game library.
STEAM KEY ROW : It means for Rest Of the World countries which are not concerned by the region restrictions. This product can't be purchased and activated in Several countries. Please read the store description to know the full list of countries which are concerned. Use the key to Download and play RiME on Steam.
Windows 10 Global : This is an Worldwide Microsoft code to play on PC for Worldwide . You need to have installed Windows 10 Anniversary Edition update on your PC. Log into your Microsoft account to download and play. Read closely the description given by the store to activate your game.
Anniversary Edition
Bundle
Standard Edition
Compare Choose & Buy Download (723)

The diffirence in prices here and on steam are shocking , thanks aks