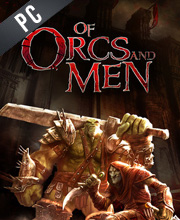 What is Of Orcs and Men CD key?

It's a digital key that allows you to download Of Orcs and Men directly to PC from the official Platforms.

How can I find the best prices for Of Orcs and Men CD keys?

Allkeyshop.com compares the cheapest prices of Of Orcs and Men on the digital downloads market to find the best sales and discount codes on trusted stores.

Of Orcs and Men is a fantasy action role-playing videogame developed by Cyanide Studio and Spiders Studio and published by Focus Home Interactive.

The Empire of Men’s oppressive threat looms over the territories of the Orcs and the Goblins. Goblins are systematically persecuted and slaughtered, while Orcs not killed in battle are captured and enslaved or killed.

Of Orcs and Men first puts the player into the role of an elite Orc soldier, Arkail, from the legendary legion of Bloodjaws. The legion is a league of warriors deeply involved in the war between the Orcs and the Goblins on one side and their persecutors, Humankind, on the other. As a veteran warrior who has seen the most brutal of battles, the player is appointed by the Orc commander to complete a mission that could change the course of the war, to kill the Emperor himself, the man responsible for the bloodshed.

A Goblin, Styx, soon joins the player, an unlikely but indispensable ally. Taking advantage of their natural traits, the two characters have their own skill trees to develop. While the Orc focuses on power, reflecting his incredible strength, the Goblin will benefit from darker powers and stealth abilities, making him the perfect assassin.

PUBLISHER WEBSITE CD KEY: Use the CD Key Code to download directly on the Official Website or from the store to play Of Orcs and Men. Follow the instructions given by the store. Verify languages available and possible region restrictions before buying.
STEAM CD KEY : Use the Steam Key Code on Steam Platform to download and play Of Orcs and Men. You must login to your Steam Account or create one for free. Download the (Steam Client HERE). Then once you login, click Add a Game (located in the bottom Left corner) -> Activate a Product on Steam. There type in your CD Key and the game will be activated and added to your Steam account game library.
EU STEAM CD KEY: Requires an EUROPEAN IP address or you must activate it with a VPN (Virtual Private Network) in order to play Of Orcs and Men. Might have languages restrictions or language packs. Read the description on the store game page to know if the EU IP is only needed for activation or for playing also (maybe on EU Servers). Most of the stores offer you their help, or show you how to do this with a tutorial to follow.
Standard Edition. Read the store description to know the content.

Be the first one to write a review about Of Orcs and Men !

Very nice price for this well known battle between orcs and men, buy it with confidence!

This is a worth buying game, great adventure and rpg elements, makes the gameplay real fun.