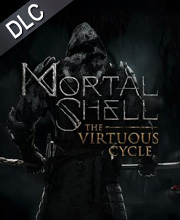 What is Mortal Shell The Virtuous Cycle CD key?

It's a digital key that allows you to download Mortal Shell The Virtuous Cycle directly to PC from the official Platforms.

How can I find the best prices for Mortal Shell The Virtuous Cycle CD keys?

Allkeyshop.com compares the cheapest prices of Mortal Shell The Virtuous Cycle on the digital downloads market to find the best sales and discount codes on trusted stores.

Mortal Shell: The Virtuous Cycle is a DLC expansion for Mortal Shell it adds a new separate game mode from the main game called the Virtuous Cycle a Roguelike mode it uses the familiar maps from the main game but with some shifting changes, double the number of enemies you will encounter, adds buffs you can find on chests and pillars called instincts these will empower your character in a direction of your choosing, and the staple of Roguelike’s permadeath. The DLC will also add a new playable shell and a weapon, can you escape this harsh and ever-shifting landscape?

Zoom 1m 3m 1y All
Track product
GOG.COM CD KEY : You need to register on Gog.com, then use the GOG Key to download and activate your game to play Mortal Shell The Virtuous Cycle.
STEAM CD KEY : Use the Steam Key Code on Steam Platform to download and play Mortal Shell The Virtuous Cycle. You must login to your Steam Account or create one for free. Download the (Steam Client HERE). Then once you login, click Add a Game (located in the bottom Left corner) -> Activate a Product on Steam. There type in your CD Key and the game will be activated and added to your Steam account game library.
PC Win 10 / Xbox Key. Digital code which allows you to play on both Xbox and Windows 10 PC. See below for more informations.
DLC
Compare Choose & Buy Download (772)