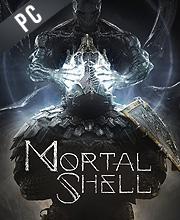 What is Mortal Shell CD key?

The CD key, or digital code, allows you to download Mortal Shell on your device directly from the game's official platform.

How can I find the best prices for Mortal Shell CD keys?

Every day Allkeyshop.com compares for you the price of Mortal Shell's CD keys in more than 70 stores and ranks them in the table below.

Mortal Shell is an action, role-playing video game that is developed by Cold Symmetry and published by Playstack.

You are placed in a shattered world where your sanity and resilience is tested. Your enemies abound and they feel no mercy. You must depend on your awareness and instincts to survive you must look for your true purpose in this dilapidated world.

The dead are everywhere, some of them are the bodies of fallen warriors. You can bring these bodies to life by occupying them which will give you instant knowledge and masteries of combat.

Plan your every attack as combat is strategic and deliberate. Watch your enemy’s movement and calculate your counter attacks to be effective and devastating. You can also entomb your Mortal Shell temporarily in order to block attacks on even attack without fear in your stone-form making your attacks deadly.

Find out who you are and what you are meant to do in Mortal Shell!

EPIC GAMES KEY : Region Free / Worldwide. Requires Epic Games Launcher App in order to play the game. You need to create a free account here in order to download Mortal Shell from Epic Plateform . Read the description on the store page about any language or country restrictions.
STEAM CD KEY : Use the Steam Key Code on Steam Platform to download and play Mortal Shell. You must login to your Steam Account or create one for free. Download the (Steam Client HERE). Then once you login, click Add a Game (located in the bottom Left corner) -> Activate a Product on Steam. There type in your CD Key and the game will be activated and added to your Steam account game library.
Standard Edition. Read the store description to know the content.

Be the first one to write a review about Mortal Shell !