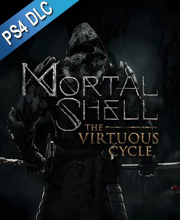 What is Mortal Shell The Virtuous Cycle Game Code?

It's a digital key that allows you to download Mortal Shell The Virtuous Cycle directly to Playstation 4 from PSN (Playstation network).

Allkeyshop.com compares the cheapest prices of Mortal Shell The Virtuous Cycle on the digital downloads market to find the best sales and discount codes on trusted stores.

Mortal Shell: The Virtuous Cycle is a DLC expansion for Mortal Shell it adds a new separate game mode from the main game called the Virtuous Cycle a Roguelike mode it uses the familiar maps from the main game but with some shifting changes, double the number of enemies you will encounter, adds buffs you can find on chests and pillars called instincts these will empower your character in a direction of your choosing, and the staple of Roguelike’s permadeath. The DLC will also add a new playable shell and a weapon, can you escape this harsh and ever-shifting landscape?

With The Virtuous Cycle, Mortal Shell tosses its hat into the roguelike ring, and while it’s a great reason to come back for more Mortal Shell, its slow progression and lack of clear direction make it less of a fulfilling experience than the main campaign.