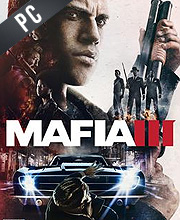 It's a digital key that allows you to download Mafia 3 directly to PC from the official Platforms.

How can I find the best prices for Mafia 3 CD keys?

Allkeyshop.com compares the cheapest prices of Mafia 3 on the digital downloads market to find the best sales and discount codes on trusted stores.

Mafia III is an action adventure videogame. Developed by Hangar 13 and published by 2K. The game is played in a third-person perspective.

Mafia III is an open world game that leaves you to freely explore the area. Gameplay is centered on gunplay, using revolvers and shotguns to kill your enemy. Stealth tactics can also be used to take out your enemies along with the use of melee weapons.

Clay will be helped by his three allies named Cassandra, Burke and Vito Scaletta. Build the strongest mob organization and destroy the Italian Mafia.

Zoom 1m 3m 1y All
Track product
GOG.COM CD KEY : You need to register on Gog.com, then use the GOG Key to download and activate your game to play Mafia 3.
STEAM EMEA KEY : What is Steam Key EMEA signification? EMEA means for Europe, Middle East and Africa and several other countries. Please read the store description about country and language restrictions to know which are concerned. Use the key to Download and play Mafia 3 on Steam.
EU STEAM CD KEY: Requires an EUROPEAN IP address or you must activate it with a VPN (Virtual Private Network) in order to play Mafia 3. Might have languages restrictions or language packs. Read the description on the store game page to know if the EU IP is only needed for activation or for playing also (maybe on EU Servers). Most of the stores offer you their help, or show you how to do this with a tutorial to follow.
EUROPEAN STEAM GIFT : It’s a steam gift for Europe which requires an European IP address to activate and to play Mafia 3 on Steam. Read carefully the store description about region and language restrictions.
STEAM GIFT : A Steam gift is a one-time transfer you receive. You activate and install Mafia 3 to play on Steam, it is a non-refundable game that stays in your Steam games collection. Please read the store description about any language or region restrictions.
STEAM CD KEY : Use the Steam Key Code on Steam Platform to download and play Mafia 3. You must login to your Steam Account or create one for free. Download the (Steam Client HERE). Then once you login, click Add a Game (located in the bottom Left corner) -> Activate a Product on Steam. There type in your CD Key and the game will be activated and added to your Steam account game library.
STEAM KEY ROW : It means for Rest Of the World countries which are not concerned by the region restrictions. This product can't be purchased and activated in Several countries. Please read the store description to know the full list of countries which are concerned. Use the key to Download and play Mafia 3 on Steam.
Bonus Edition
Bundle
Definitive Edition
Deluxe Edition
Standard Edition
Compare Choose & Buy Download (772)

Great action game and highly recommended however not at the same level of the previous one.

Offer from Gamers Outlet shows clearly Availability: Out Of Stock
And here is shown in stock.

Thanks for the report, i have passed it along at the team.

Mafia 3 is great game and have great story i must say! Best price on cdkeys.com

wow i love this game. would like to buy it one day