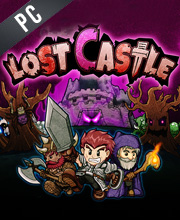 What is Lost Castle CD key?

It's a digital key that allows you to download Lost Castle directly to PC from the official Platforms.

How can I find the best prices for Lost Castle CD keys?

Allkeyshop.com compares the cheapest prices of Lost Castle on the digital downloads market to find the best sales and discount codes on trusted stores.

Castle Harwood was once a happy land ruled by moral nobles. Now it is in chaos with demons and wicked magics all over. Corruption is spreading fast. In the middle of all the nightmare lies the treasure of the previous kingdom. The treasure is what calls you, even though danger abounds.

If roguelikes are your cup of tea, you probably won’t find much gripe with Lost Castle. Seeing all the characters you could possibly be is enjoyable, and working through your skill tree feels rewarding, but the grind and repetition of much of the gameplay make you question whether it’s worth the hours.

There’s some quality stuff in Lost Castle and I genuinely hope it gets fixes for its flaws. But, as of right now, it’s a decent-ish co-op title that’s borderline unplayable alone.

This Bundle Edition contains the base game and the following games:

The Collection Edition contains the base game and the following games:

Zoom 1m 3m 1y All
Track product
ORIGIN CD KEY : Use the Origin Key Code (Electronic Arts - EA) on Origin Platform to download and play Lost Castle. You have to login to your Origin Account or create one for free. Download and install the Origin Software HERE) then you can activate the game on it. Once installed, start Origin, click on the Origin Tab and click on Redeem Product Code and just enter the key. The game will appear in your My games list.
EU STEAM CD KEY: Requires an EUROPEAN IP address or you must activate it with a VPN (Virtual Private Network) in order to play Lost Castle. Might have languages restrictions or language packs. Read the description on the store game page to know if the EU IP is only needed for activation or for playing also (maybe on EU Servers). Most of the stores offer you their help, or show you how to do this with a tutorial to follow.
EUROPEAN STEAM GIFT : It’s a steam gift for Europe which requires an European IP address to activate and to play Lost Castle on Steam. Read carefully the store description about region and language restrictions.
STEAM GIFT : A Steam gift is a one-time transfer you receive. You activate and install Lost Castle to play on Steam, it is a non-refundable game that stays in your Steam games collection. Please read the store description about any language or region restrictions.
STEAM CD KEY : Use the Steam Key Code on Steam Platform to download and play Lost Castle. You must login to your Steam Account or create one for free. Download the (Steam Client HERE). Then once you login, click Add a Game (located in the bottom Left corner) -> Activate a Product on Steam. There type in your CD Key and the game will be activated and added to your Steam account game library.
Bundle
Collection
Deluxe Edition
Standard Edition
Compare Choose & Buy Download (743)

really love the game! good mix of Castle Crashers and Rogue Legacy. hope to see the game improve more down the road and some more levels added! the only thing i have a problem is that being stuck in a combo attack and needing to move when an enemy is charging at you. doesn’t feel responsive to the controls. be great if running was an option like holding down shift as oppose to auto running after 5 secs of walking. i don’t want to lundge at the explosive barrel :'( also would like to see more bosses on the same level like how 1st area has 2!