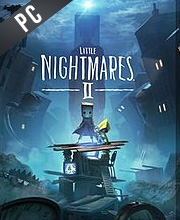 What is Little Nightmares 2 CD key?

It's a digital key that allows you to download Little Nightmares 2 directly to PC from the official Platforms.

How can I find the best prices for Little Nightmares 2 CD keys?

Allkeyshop.com compares the cheapest prices of Little Nightmares 2 on the digital downloads market to find the best sales and discount codes on trusted stores.

This suspense-adventure game will have players step into the role of Mono a boy who finds himself trapped in a world that is distorted because of a tower’s humming transmission that is located in the distance. He is guided by a girl in a yellow raincoat named Six.

A perfect sequel. Expanding on what worked last time, improving what did not work, adding ideas that were missing, and taking the story to places we have never seen before. As a fan of Little Nightmares, you could not ask for more.

A fantastic sequel soaked in atmosphere and tension. Little Nightmares II surpasses its predecessor far beyond what anyone would have expected. An outstanding finale which stretches from the finale boss fight from the closing credits will have fans desperate for a third installment.

Little Nightmares II is a wonderful follow-up to the original, and manages to feel similar yet unique. The world-building is amazing, the puzzles are simple but fun, the story is intriguing, everything adds up to a really great experience. Tarsier Studios has outdone themselves with Little Nightmares II, and I cannot wait to see what they have in store for us next.

GOG.COM CD KEY : You need to register on Gog.com, then use the GOG Key to download and activate your game to play Little Nightmares 2.
EU STEAM CD KEY: Requires an EUROPEAN IP address or you must activate it with a VPN (Virtual Private Network) in order to play Little Nightmares 2. Might have languages restrictions or language packs. Read the description on the store game page to know if the EU IP is only needed for activation or for playing also (maybe on EU Servers). Most of the stores offer you their help, or show you how to do this with a tutorial to follow.
STEAM GIFT : A Steam gift is a one-time transfer you receive. You activate and install Little Nightmares 2 to play on Steam, it is a non-refundable game that stays in your Steam games collection. Please read the store description about any language or region restrictions.
STEAM CD KEY : Use the Steam Key Code on Steam Platform to download and play Little Nightmares 2. You must login to your Steam Account or create one for free. Download the (Steam Client HERE). Then once you login, click Add a Game (located in the bottom Left corner) -> Activate a Product on Steam. There type in your CD Key and the game will be activated and added to your Steam account game library.
STEAM KEY ROW : It means for Rest Of the World countries which are not concerned by the region restrictions. This product can't be purchased and activated in Several countries. Please read the store description to know the full list of countries which are concerned. Use the key to Download and play Little Nightmares 2 on Steam.
Deluxe Edition
Standard Edition
Compare Choose & Buy Download (723)

The flashlight mechanic in Little Nightmares II looks amazing because it’s crazy how the enemies react to it. Reminds me of Alan Wake in a way.

The first little nightmares was all about being a mini person, seeing normal environments like kitchens and air-vents through the eyes of a mouse-like sized human. However, the second game should be even better with improvements for the environments, physics, controls and much better tension and horror now that the developers know what they’re doing. Only a few days away and I’m excited to see how they improve on the first one.

I will probably buy the game it looks really good.The one was GOLDIE and it was such a great experience, I think that this one will rock too lets see and lets gooo!

I want to try a different type of videogames since in this day i’ve been only playing strategy game but before i have to play the first one but i know that the second one is a prequel of the first one.

Cute platform game. And 8% aks discount is fantastic who wanna get the game. Lets get 2 of them for enjoy.