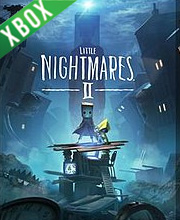 What is Little Nightmares 2 Game Code?

It's a digital key that allows you to download Little Nightmares 2 directly to Xbox One from Xbox Live.

How can I find the best prices for Little Nightmares 2 on Xbox one?

Allkeyshop.com compares the cheapest prices of Little Nightmares 2 on the digital downloads market to find the best sales and discount codes on trusted stores.

This suspense-adventure game will have players step into the role of Mono a boy who finds himself trapped in a world that is distorted because of a tower’s humming transmission that is located in the distance. He is guided by a girl in a yellow raincoat named Six.

While I wouldn’t say Little Nightmares 2 is a ‘fun’ time, it’s certainly an entertaining one. Creepy visuals and audio suck us in, and some smart, well-paced puzzles and set pieces keep us hooked for the duration. A few of these teeter on annoyance at times, but are also short enough to never actually make us want to stop playing. A strange, creepy delight of a game, Little Nightmares 2 deserves to stand out as one of the best releases of the year.

This impressive follow-up builds on its predecessor with emotional gut punches and unnerving visuals that stick with you.