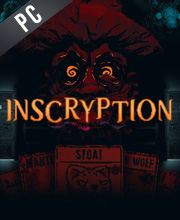 What is Inscryption CD key?

It's a digital key that allows you to download Inscryption directly to PC from the official Platforms.

How can I find the best prices for Inscryption CD keys?

Allkeyshop.com compares the cheapest prices of Inscryption on the digital downloads market to find the best sales and discount codes on trusted stores.

Inscryption is a card-battler, horror, deck building, roguelike game with a hint of escape-room-like puzzles. From the makers of The Hex and Pony Island, Inscryption is another game that will blow your mind. Players will find themselves in a cabin, which they are trying to escape. Along the way, they find cards and pelts that can help them out.

The art style, mixed with the fun mechanic of deck building, puzzles, and overarching story is just phenomenal. And that my friends, is just Act I, at already 8 hours of playtime. Inscryption has three total acts, with much, much more content waiting for you to uncover.

All I can really say is that I think the narrative is extremely well done and I should have expected that coming from the guy who also created Pony Island which I thoroughly enjoyed as well. The art design and the audio design are also top notch. Expect to see this on plenty of GOTY lists as well as GOTY discussions because what I think Inscryption is extremely well done both in narrative and gameplay.

Inscryption is full of charm, humour, and a healthy dose of mystery. Forget what you think you know about this game, it’s so much more.

The Beginners’s Deck bundle contains 3 Daniel Mullins games for you to enjoy!

GOG.COM CD KEY : You need to register on Gog.com, then use the GOG Key to download and activate your game to play Inscryption.
EU STEAM CD KEY: Requires an EUROPEAN IP address or you must activate it with a VPN (Virtual Private Network) in order to play Inscryption. Might have languages restrictions or language packs. Read the description on the store game page to know if the EU IP is only needed for activation or for playing also (maybe on EU Servers). Most of the stores offer you their help, or show you how to do this with a tutorial to follow.
EUROPEAN STEAM GIFT : It’s a steam gift for Europe which requires an European IP address to activate and to play Inscryption on Steam. Read carefully the store description about region and language restrictions.
STEAM GIFT : A Steam gift is a one-time transfer you receive. You activate and install Inscryption to play on Steam, it is a non-refundable game that stays in your Steam games collection. Please read the store description about any language or region restrictions.
STEAM CD KEY : Use the Steam Key Code on Steam Platform to download and play Inscryption. You must login to your Steam Account or create one for free. Download the (Steam Client HERE). Then once you login, click Add a Game (located in the bottom Left corner) -> Activate a Product on Steam. There type in your CD Key and the game will be activated and added to your Steam account game library.
Bundle
Bundle 1
Standard Edition
Compare Choose & Buy Download (723)