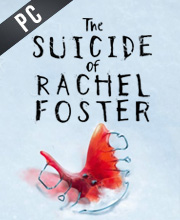 What is The Suicide of Rachel Foster CD key?

It's a digital key that allows you to download The Suicide of Rachel Foster directly to PC from the official Platforms.

How can I find the best prices for The Suicide of Rachel Foster CD keys?

Allkeyshop.com compares the cheapest prices of The Suicide of Rachel Foster on the digital downloads market to find the best sales and discount codes on trusted stores.

The Suicide of Rachel Foster is an adventure video game that is developed by One-O-One Games and published by Daedalic Entertainment.

The year is 1993 in Lewis & Clark County, Montana, USA. Nicole is forced to come back to their hotel that had not been in service for so long that it remained a decaying structure. Her parent’s last wish is for the hotel to be sold and that she make amends with Rachel’s relatives.

Rachel was the same age as Nicole 10 years ago when she got pregnant by Nicole’s father. Because of that, the affair had been discovered leading to Nicole and her mom leaving and Rachel’s suicide.

But that was in the past and Nicole is determined to put those things behind her. This made her decision to sell the hotel absolute. She comes back with a lawyer in order to audit the building.

Unfortunately, the weather became bad and Nicole and the FEMA agent gets stuck in the hotel. This allows her to investigate what happened and get a deeper understanding of her family’s secrets.

Offering a multi-layered thriller that comes with elements of mystery and horror. Binaural audio is also available for a more immersive experience.

Get acquainted with a story about love and death as well as nostalgia and melancholy in this stirring ghost story.

The Suicide of Rachel Foster is not exclusively a drama, but also a horror adventure and exploration game