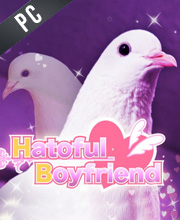 What is Hatoful Boyfriend CD key?

It's a digital key that allows you to download Hatoful Boyfriend directly to PC from the official Platforms.

How can I find the best prices for Hatoful Boyfriend CD keys?

Allkeyshop.com compares the cheapest prices of Hatoful Boyfriend on the digital downloads market to find the best sales and discount codes on trusted stores.

Hatoful Boyfriend is a Japanese dōjin soft otome visual novel as well as a casual, indie and simulation videogame.

It was developed by manga artist Hato Moa’s dōjin circle PigeoNation Inc. and Mediatonic published by Devolver Digital. This is the successor to a Flash game of the same name she created for April Fools’ Day in 2011.

Hatoful Boyfriend is an interactive text-based visual novel that follows a branching plot line, with the player’s decisions determining which of the game’s multiple endings they receive. The title is a pun on the wasei-eigo word hātofuru (“heartful”, also “hurtful), and the Japanese word hato (“pigeon”, “dove”), as the game features pigeons and other birds as major characters.

The game is set in a version of Earth populated by sapient birds, and its main story follows the player character and protagonist is the only human attending St. PigeoNation’s Institute, an elite school for birds—as she finds love among her avian acquaintances. The player assumes control of the protagonist, a teenage human girl.

As the game follows a branching plot line with multiple endings, at various points during gameplay the player is allowed to make choices that determine which character’s romance route the player will encounter. On weekdays, the player can also choose which classes to attend, which change one of the protagonist’s three stats depending on the activity chosen. Having certain stat values are required to obtain the good endings for each love interest and to otherwise advance along certain routes.

Zoom 1m 3m 1y All
Track product
GOG.COM CD KEY : You need to register on Gog.com, then use the GOG Key to download and activate your game to play Hatoful Boyfriend.
STEAM GIFT : A Steam gift is a one-time transfer you receive. You activate and install Hatoful Boyfriend to play on Steam, it is a non-refundable game that stays in your Steam games collection. Please read the store description about any language or region restrictions.
STEAM CD KEY : Use the Steam Key Code on Steam Platform to download and play Hatoful Boyfriend. You must login to your Steam Account or create one for free. Download the (Steam Client HERE). Then once you login, click Add a Game (located in the bottom Left corner) -> Activate a Product on Steam. There type in your CD Key and the game will be activated and added to your Steam account game library.
STEAM KEY ROW : It means for Rest Of the World countries which are not concerned by the region restrictions. This product can't be purchased and activated in Several countries. Please read the store description to know the full list of countries which are concerned. Use the key to Download and play Hatoful Boyfriend on Steam.
Windows 10 Global : This is an Worldwide Microsoft code to play on PC for Worldwide . You need to have installed Windows 10 Anniversary Edition update on your PC. Log into your Microsoft account to download and play. Read closely the description given by the store to activate your game.
Collector Edition
Complete Pack
Standard Edition
Compare Choose & Buy Download (743)