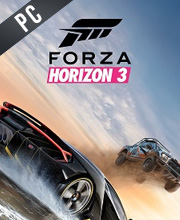 What is Forza Horizon 3 CD key?

It's a digital key that allows you to download Forza Horizon 3 directly to PC from the official Platforms.

How can I find the best prices for Forza Horizon 3 CD keys?

Allkeyshop.com compares the cheapest prices of Forza Horizon 3 on the digital downloads market to find the best sales and discount codes on trusted stores.

Forza Horizon 3 is a racing video game set in an open world. This is actually the third Forza Horizon and also the ninth installment of the whole Forza series. The game is developed by Playground Games and published by Microsoft Studios.

The game’s map is actually two times bigger than that of the previous installment. Still, the game’s map is based in Australia giving you places like Surfer’s Paradise, Byron Bay, Yarra Valley, and the Outback. Get to choose from 350 cars at the game’s startup. Play with three other friends in the four-player cooperative multiplayer campaign which includes the cross-platform play from the Xbox Play Anywhere program.

This time around, you are the director of the Horizon festival. Put yourself in the shoes of the director and get to organize and customize race events as well as hire and fire racers. All of these made possible with the Horizon Blueprint feature.

Can you handle Forza Horizon 3? Know if you can by playing the game.

it’s forza horizon 4 but in Australia and is very cool too.