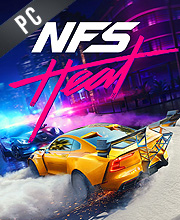 What is Need for Speed Heat CD key?

It's a digital key that allows you to download Need for Speed Heat directly to PC from the official Platforms.

How can I find the best prices for Need for Speed Heat CD keys?

Allkeyshop.com compares the cheapest prices of Need for Speed Heat on the digital downloads market to find the best sales and discount codes on trusted stores.

Need for Speed Heat is a racing video game that is developed by Ghost Games and published by Electronic Arts. This is the 24th installment for the Need for Speed Series.

Set in an open world environment which is a fictionalized version of Miami called Palm City. Unlike the previous game which was Need for Speed Payback, Heat does not have a 24 hour day and night cycle. It does, however, still have a day and night in the game. During the day, players are able to race in legal races on tracks where they can earn cash that they can use on their new cars as well as upgrades. And if you choose the night scene, illegal races are what you can join. Winning in these races will boost your reputation. Since the races are done on public roads and are illegal, the cops will be after you. You must escape them and get back to your safe house before you either wreck your car or the cops arrest you.

There will be 125 cars from 33 different brands to choose from. Performance upgrades in the game can now be unlocked by reputation and winning races.

This game, like most EA games, lacks polish, and is full of awful things that make it really worse than what it should be. The first problem is the performance on most computers, being pretty mediocre even with high end material. If you buy this game, I guarantee you'll at leas want to use mods to make it run more smoothly, unless you want it to look like garbage and run like garbage. With the mods ""Missing Files"" for Need For Speed Heat, you should have good frame rate at medium to high graphic on a decent computer. It can absolutely look beautiful if you have a really good pc, almost as good as GTA V with mods. The tracks are nice and it's definitely a game of progress because your starting car isn't as good as someone who unlocked more advanced upgrades, so if you're looking for a perfectly fair skill based racing game you might want to pick something else. But if you want a more story-driven game, this is for you.

Tons of car customisation, and it's not a easy game, the cops are pretty tough, maybe too tough sometimes on harder difficulties.

The soundrack in this game is terrible, probably one of the worst I've ever listened to, to the point of making me feel sick to my stomac. If you muste it and run some Carpenter Brut tracks it's okay. Also mute the character voices, they're annoying.

Should you play this game instead of another car game? I don't know, because I haven't played many in the genre in recent times, but if you're looking for a game worth 20 bux this is surely a great buy, especially if you mod the game a little. Don't buy it if it's not on sale anymore, DO NOT blow more than 60$ on an EA game, ever.

Do you feel the heat? The burning rubber and the fast paced action? Well i didn't.

This game comes with a 20h story and well stories in race games are never that good.. and this one is actually ok. But thats it. When you completed the story there is no real insentence to keep on playing because it's only grinding for money or fame and not playing with other players... you would think this is cool online right? But it's not.. nobody joins a race you do and you end up driving vs AI all the time. So watch out for that. Also the cars drive too arcade and the graphics are below par imo. I expected NFS to have better graphics by now but no.

The only fun part of this game for me was driving at night for fame while escaping the police.. the lights and action while beeing chased is and will stay fun in a NFS game but it won't hold up for me in the long run.

I would not recommend this game, but maybe you just like to grind and get cars. And it's more for you.

It’s an EA Game : Not optimized and lack of update.

It’s a racing game that’s easy to drive and feel the speed. For now, I think it is the best racing game.

Nice game, i bought it from allkeyshop, they show the cheapest options.

Omg thsi game is very good i play it on ps4 everyday and it feels never borring. We have a lot of content even that the developpers stopped working on the gale

Amazing game with great graphic and bunch of cool car