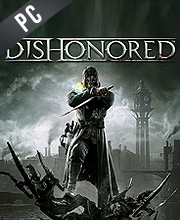 What is Dishonored CD key?

It's a digital key that allows you to download Dishonored directly to PC from the official Platforms.

How can I find the best prices for Dishonored CD keys?

Allkeyshop.com compares the cheapest prices of Dishonored on the digital downloads market to find the best sales and discount codes on trusted stores.

Dishonored is a stealth action–adventure FPS game published and developed by Arkane Studios and Bethesda Softworks.

The game is played in first person perspective from the view of Corvo Attano. Framed for the murder of the Empress of the Isles he becomes an assassin seeking the true killers. Graphics side, the developers were successful in creating a truly stimulating visual game.

The game play is the strong point of the game! You are able to enjoy the the exciting scenery with user friendly controls.

In short it is a little gem with a fresh outlook and concrete background that will appeal to those who take the time to play and explore the world at their own pace, immersing yourself will lead to a deeper appreciation for this complex world.

This is an involved FPS game with many options when it comes to missions and quests and how you accomplish the tasks in front of you.

What choices will you make, and where will they take you ?

Great stealth game. For my personal liking combat is ok, but you have to play it stealthy. Possible to play baldly and just go killing around everyone, but I would say it is not made for it. I would recommend it only if you are enjoying stealth games.

Loved this title so much thanks to the many power ups to your weapons and abilities. If you like stealth game is the way to go. Still enjoyable