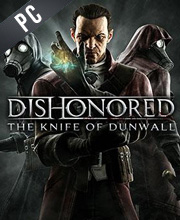 What is Dishonored DLC The Knife of Dunwall CD key?

It's a digital key that allows you to download Dishonored DLC The Knife of Dunwall directly to PC from the official Platforms.

How can I find the best prices for Dishonored DLC The Knife of Dunwall CD keys?

Allkeyshop.com compares the cheapest prices of Dishonored DLC The Knife of Dunwall on the digital downloads market to find the best sales and discount codes on trusted stores.

Dishonored: Dunwall The Blade is an extension to the game Dishonored, a action / adventure game, developed by Bethesda softworks and edited by Arkane Studio.

This game consists of three episodes and features new accessories with powers and new characters. We will thus have the pleasure of discovering the story from another point of view and see the basic story of with complementary elements that allow a more in depth discovery of the city by exploring new streets previously inaccessible (not less than two quarters). How to play remains faithful to the basic game that will not displease you, it is so instinctive and fun from its start and will offer multiple possibilities to the main subject.

Indeed, the extension is expected to really develop Daud, which will allow him a full discovery of these neighborhoods through its powers and in particular Wink. In mid-air, it becomes possible to activate the power (by releasing all other orders) remain outstanding and choice of landing site. A piggyback this new gadgets, like lightning mine (non-fatal) or stun grenade that emits a cloud of “tear gas.” You will have a new game in a known world, but with the pleasure of rediscovering the “other side.”

EU STEAM CD KEY: Requires an EUROPEAN IP address or you must activate it with a VPN (Virtual Private Network) in order to play Dishonored Knife of Dunwall. Might have languages restrictions or language packs. Read the description on the store game page to know if the EU IP is only needed for activation or for playing also (maybe on EU Servers). Most of the stores offer you their help, or show you how to do this with a tutorial to follow.
STEAM CD KEY : Use the Steam Key Code on Steam Platform to download and play Dishonored Knife of Dunwall. You must login to your Steam Account or create one for free. Download the (Steam Client HERE). Then once you login, click Add a Game (located in the bottom Left corner) -> Activate a Product on Steam. There type in your CD Key and the game will be activated and added to your Steam account game library.
Bundle
Collection
Complete Collection
DLC

good game i want to try it