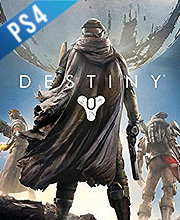 It's a digital key that allows you to download Destiny directly to Playstation 4 from PSN (Playstation network).

Destiny is by no means a flawless game, but it’s able to overshadow its faults by offering superb gameplay while blending everything into a singular, truly fun experience.

Destiny is a great prologue, but it is still just a prologue. It’s like telling somebody all about Middle Earth; the races, the lands, the set up for the story, but not telling them of Bilbo’s adventures in The Hobbit or the fellowship’s journey in The Lord of the Rings.

It is a good offer for this cool game. A must buy for us all!

Really great game. Only on on ps4 which is not so great

I know this comment is old, but now the game is available on ALL plateform !! See the game description at the top for links.

i absolutely love this game! This first-person shooter is worth every penny! Good graphics!

this game is very nice and beautiful graphics,it’s one of the best action games