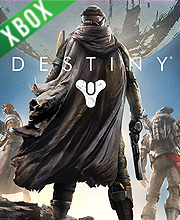 It's a digital key that allows you to download Destiny directly to Xbox One from Xbox Live.

How can I find the best prices for Destiny on Xbox one?

It’s not quite the epic space-faring journey we were expecting, but for the time being, we’ll sit back and enjoy the ride.

Destiny feels like the key elements of an FPS and an MMO gently resting shoulder to shoulder, instead of being fused together in a truly creative way. It plays and looks great, and offers many, many hours of entertainment to anyone okay with repeating the same tasks, but it isn’t exactly the game-changing science fiction epic we felt it was aspiring to.

Zoom 1m 3m 1y All
Track product
XBOX ONE GAME CODE : Use the Digital Code received by mail in your Xbox One account to download Destiny from the Xbox Live. Internet connection is required. Please read the store description about any language or region restrictions.
Collection
Standard Edition
Compare Choose & Buy Download (743)

I really love Destiny ,good graphics and lots of fun

Great game, would like it’s price to be lower but you know, you cant always have what you want

Very good game, enjoyed it very much when playing it

Oh man, I love Destiny, and that landscapes too, Russia is the best scenario. 10/10