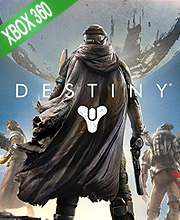 It's a digital key that allows you to download Destiny directly to Xbox 360 from Xbox Live.

How can I find the best prices for Destiny on Xbox 360 ?

Overall Destiny’s largest problem may be failing to even come close to pre-launch expectations. The game is sadly a confused shooter made with the purpose of keeping players addicted by grinding more than by offering enough enjoyment to keep them around. The game tries to balance PvP with PvE and it winds up not having enough to satisfy either side. The game tends to feel more like a part time job or a chore, but if you like spending countless hours trying to obtain a single item completely at random, then it may be the game for you.

Destiny, a multplayer fps, i like it but it is a lil bit overpriced

Destiny is just an amazing multiplayer first-person shooter, a must play on either PC or Xbox consoles!